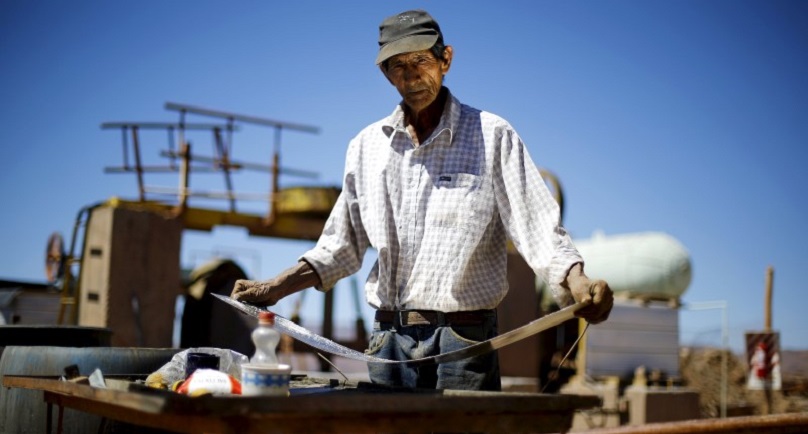 Image: Luis Cortes, an artisanal miner, holds up a metal sheet used to capture gold after submerging it in a mixture of water and ore, at a mill in a small copper and gold processing plant at the “Inca de Oro” (Inca gold) miners association near Copiapo city, north of Santiago, Chile, December 14, 2015. REUTERS/Ivan Alvarado

INCA DE ORO, Chile (Reuters) – Like his father before him, Alberto Carrizo has worked in Chile’s copper mines since he was a teenager, supporting his family as prices for the metal boomed in recent decades.

But as copper prices have slid to a more than six-year low, Carrizo and his colleagues labouring away at the countless smaller mines that pock mark the Atacama desert are finding the buckets of ore they spend all day digging from the ground are fetching less and less money.

Some are responding by turning to gold mining, others are finding work in growing industries like renewable energy, while a dwindling few are hanging on, hoping prices will yet recover.

They are at the sharp end of a commodities downturn that was triggered by slowing growth in China and which has led half of all the small mining operations in top copper exporter Chile to shut in the last eight years.

Although 93 percent of the country’s output comes from larger mines, a sharper drop in copper prices could send more small and medium-sized mines over the edge. Small mines generally employ up to 80 workers but are often much smaller, while medium-sized ones have a maximum of 400.

The mass closing of mines represents a potential social and political disaster for Michelle Bachelet, who has staked her centre-left presidency on improving social equality while keeping the country’s famously successful economy ticking along. Copper makes up half of all of Chile’s exports.

Mines of all sizes shed some 23,000 jobs last year alone, around 10 percent of positions in the sector, making it by far the biggest loser in Chile’s economy, according to data from the government’s INE statistics agency.

Carrizo, 59, was one of 100 workers laid off from a medium-sized operation last year.

Like many other miners who were let go by larger operations, Carrizo has since turned to small-scale mining and now spends his days 1,000 feet (305 m) underground, chipping away at the copper-rich bowels of a mountain he first visited while his father worked there in 1969.

But his stint at the Rodesia mine, which overlooks the dusty streets of the tiny mining outpost of Inca de Oro, may be short-lived.

“I’ve still got the strength to keep working another 10 or 15 years (but) things are complicated … I’m going to look for a gold mine because prices are better,” said Carrizo.

STRIKING GOLD
Like their larger peers, small- and medium-sized mining companies are coping with the copper price drop by cutting jobs, reducing salaries and heaping more work onto fewer labourers.

With leathery hands, miners at small-scale operations across the Atacama are painstakingly picking out rocks that contain higher-grade ore. When China’s economy was still growing in double digits, or near there, it could hardly buy copper fast enough to manufacture wiring, cables and plumbing materials for its construction boom. The metal sold for a giddy $4.00 per pound or more – around double today’s price – and miners would load trucks with as much material as possible.

But now some are turning to gold, whose safe-haven status has driven up prices for the precious metal nearly 15 percent so far in 2016.

“A lot of miners are moving to gold from copper because with the current level of the dollar it’s very profitable,” said Reinaldo Leiva, the top government mining authority in the Atacama region.

“For the miner who has been working in mining for generations, it’s very difficult to switch to another activity because it’s all he knows how to do,” said Leiva.

Reuters spoke to a dozen miners who had recently made the switch to gold, or were looking to do so.

Gray-haired Nolberto Barrera has been working in Chile’s mines for half a century, after getting his start while still in school at the age of 12.

“I was working at a copper mine but since prices have dropped I’m going to dedicate myself to gold. It’s the only way to make a little bit of money,” said Barrera, who even tried his hand at working at a local vineyard before returning to what he knows best.

NO PANACEA
However, Chilean gold production is tiny compared with its copper industry, accounting for just 1.3 percent of global output in 2015. It employed around 6,000 people in 2013, the last year for which reliable data is available. That makes it an unlikely panacea in terms of absorbing the lost jobs from copper.

Although the sector has shrunk significantly since the height of the boom, as many as 27,000 people still work in small or medium scale copper mining companies in Chile.

Between them, they are producing some 390,000 tonnes of copper annually, about 7 percent of Chile’s total.

“There are five or six (medium scale) mines that if we don’t do something in terms of supporting production, their operational continuity is in danger … that’s about 50,000 tonnes of copper,” said Alberto Salas, the head of the Sonami mining industry association.

Right now, only government aid stands between many small and medium mines and failure. State-backed loans, subsidies for essential ingredients such as sulphuric acid, and courses to help miners improve technical skills are among key measures.

“Small-scale mining is a constant concern, which is why we’ve run relevant initiatives that increase productivity and strengthen the sector,” Mining Minister Aurora Williams told Reuters.

Under the most important of those initiatives, state-run mining company Enami purchases copper from such miners at a subsidized rate. Last year Chile spent some $22 million, and once prices recover the loans must be paid back with interest.

But if copper prices fall further, industry insiders say such measures will not be enough. The government has set aside some $20 million through June for the loans and is currently paying miners up to $2.43 per pound for their copper, some 40 cents more than average spot prices, and has said that will not increase at least until midyear. But costs for small-scale producers average around $2.50 per pound.

For Bernardo Carrizo, Alberto Carrizo’s younger brother and a union head for small-scale miners, the government aid is crucial.

“We still haven’t stopped but we’re swimming upstream,” he said. “And what’s coming doesn’t look good because the trend (for copper prices) is lower.”