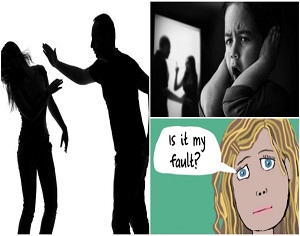 Witnessing can mean seeing actual incidents of physical abuse. It can mean hearing threats or fighting noises. Children may also observe the aftermath of physical abuse such as blood, bruises, tears, torn clothing, and broken items that leads to them being aware of the tension in the home such as their mother’s fearfulness when the abuser arrives home or approaches.

How do children exposed to battering feel?

Children who are exposed to battering become fearful and anxious. They are always on guard, watching and waiting for the next event to occur. They never know what will trigger the abuse, and therefore they never feel safe. They always worried for themselves, their mother and their siblings. They may feel worthless and powerless.

Children who grow up with abuse are expected to keep the family’secret, sometimes not even talking to each other about the abuse. Children from abusive homes can look good from the outside world, but inside they are in terrible pain. They may blame themselves for the abuse thinking if they had not done or said a particular thing, the abuse would not have occurred. They may also be angry at their siblings or their mother for triggering the abuse. They may feel rage, embarrassment, and humiliation.

Children of abuse feel isolated and are starved for attention, affection and approval. These children become physically, emotionally and psychologically abandoned because their mother is struggling to survive and is not often present for them while dad is so consumed with trying to control everyone.

How do the children who witness domestic violence exhibit?

The emotional responses of children who witness domestic violence may include fear, guilt, shame, sleep disturbances, sadness, depression, and anger (at both the abuser for the violence and at their mother for being unable to prevent the violence).

Physical responses of children who witness domestic violence may include stomach ache, head ache, loss of ability to concentrate or some may be injured to trying to intervene on behalf of their mother sibling.

The behavioural responses of children who witness domestic violence may include acting out, withdrawal, or anxiousness to please. These children may exhibit’signs of anxiety and have a short attention span, which may result in poor school performance and attendance. They may experience development delays in speech and, may also use violence to express themselves displaying increased aggression with peers or mother. They can become self-injuring.