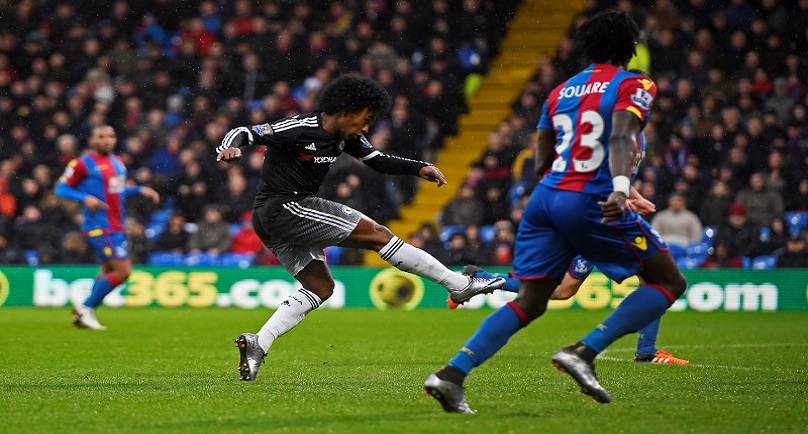 LONDON (Reuters) – Chelsea began the year offering signs of a revival as the Premier League champions won 3-0 at Crystal Palace on Sunday before Tottenham Hotspur underlined their top-four credentials with a 1-1 draw at Everton.

Goals from Brazil duo Oscar and Willian and one for Spain striker Diego Costa earned Chelsea the points at Selhurst Park and gave stand-in manager Guus Hiddink his first win since taking over last month.

Hiddink’s side began the day in 16th place, three points above the relegation zone after a woeful opening half of the season, but comprehensively outplayed seventh-placed Palace in torrential rain.

Chelsea’s biggest league victory for 12 months, only their third in their last 11 matches, moved them up two spots on 23 points, 13 points behind fourth-placed London rivals Tottenham who shared the points in a tight tussle at Goodison Park.

Former Spurs winger Aaron Lennon gave Everton the lead but Dele Alli equalised on the stroke of halftime as the visitors stretched their unbeaten away run to nine games.

Tottenham have 36 points, six behind leaders Arsenal who moved top with a 1-0 home win over Newcastle United on Saturday, four adrift of surprise package Leicester City and three off Manchester City. Everton remain in mid-table with 27 points.

While a top-four finish still appears unlikely for Chelsea, captain John Terry said the club is now moving in the right direction having lost nine of their opening 15 games.

“This was the Chelsea of last year, the football was first class and we kept the ball in tough conditions,” captain Terry told Sky Sport.

“A near year, a new start, we just have to keep winning games now. We are where we are, we knew as a group we had to get better and we have done’so slowly and surely and today hopefully is not the last of it.”

MEASURED PASS
Palace, who stay on 31 points but could have gone fifth with a win, were without two of their most influential players in suspended midfielder Yohan Cabaye and injured winger Yannick Bolasie but more than matched the visitors for 25 minutes.

Frazier Campbell had a half chance but sliced wide and shortly afterwards Chelsea struck.

Cesc Fabregas, booed by Chelsea’s fans in the wake of Mourinho’s dismissal, split the Palace defence with a measured pass and Costa, another player who has disappointed this season, advanced on goal before unselfishly squaring the ball for Oscar to stroke home after 29 minutes.

Wilfried Zaha wasted Palace’s only opening of the second half when he shot tamely at goalkeeper Thibaut Courtois.

Chelsea then extended their lead in spectacular fashion on the hour, Willian’s ferocious rising drive from just outside the penalty area giving Hennessey no chance.

Six minutes later Costa capped a hard-working performance with a close-range third goal after Willian’s shot was saved.
Chelsea’s only concern was an injury to their Belgium forward Eden Hazard who limped off midway through the first half after signalling to the bench that he could not continue.

LENNON STRIKES
Tottenham, who have been the subject of title talk this week after a fine Christmas spell, dominated the first half at Everton with Harry Kane and Ben Davies rattling the woodwork, but they trailed to Lennon’s well-taken goal after 22 minutes.

They were rewarded just before halftime when Alli chested down a superb pass from Toby Alderweireld and volleyed low past Everton keeper Tim Howard.

Everton improved after the break and could have won it through Ross Barkley in stoppage time but Tottenham manager Mauricio Pochettino said he felt it was two points dropped.

“Normally we have music in the dressing room,” said the Argentine. “We did not after this game because we are disappointed. Maybe tomorrow we can feel proud we have a point but now we feel this is two points lost.”

(Story refiled to fix spelling of Dele in para five)