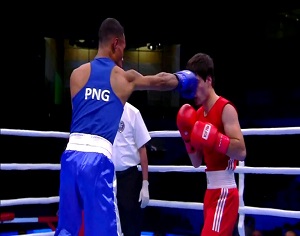 Despite picking up the pace throughout the latter part of the first round, and throughout the second, Keama was run raged by his Armenian opponent who was full of energy.

Keama though almost caught Sogohomonyan off guard late in the second round, landing an upper cut and almost causing a knock out.

Sogohomonyan proved though that he was there to win the fight, coming in strong in the last few seconds of the round and scoring points that put him further in front on the score card.

Despite Keama’s best efforts, a spirited fightback in the third and final round wasn’t enough to sway the judge’s minds, with the Armenian prevailing thanks to a unanimous decision.

Australian Scholarships Open For All