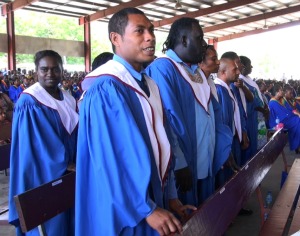 Not securing employment in their chosen field remains the key concern after students graduate from institutions.

She said that it wasn’t going to be easy and graduates should not relax just because they had graduated.

Wano wanted students to know that the chance of getting the job of their dreams isn’t a straightforward process.

She believed a lot of students aim high but forgot that humble beginnings are what build a person.

In her experience as HR personnel, she said the odds of graduates getting a job of their respective profession were quite slim.

The ratio of graduates to a job, in her opinion, ranged between 20 to 30 graduates.

He believed students from ITI had an advantage, in that the courses offered there qualified graduates for core positions in every company.

A handful of graduates said they were either already working or have secured positions in various companies.

Nine Mile Market Closed After Policeman Slashed In The Neck