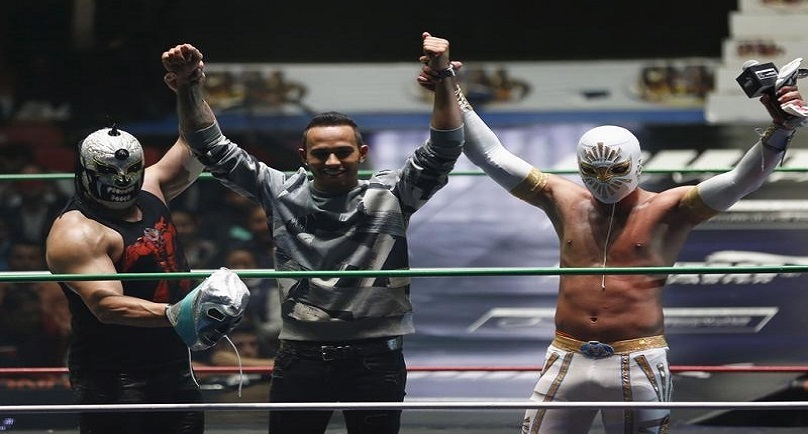 Image:Mercedes Formula One driver Lewis Hamilton of Britain (C) poses with with Mexican wrestlers at the Coliseo Arena during a promotional event in Mexico City October 28, 2015. REUTERS/Henry Romero

MEXICO CITY (Reuters) – Lewis Hamilton still has to pinch himself to believe he is a three times Formula One world champion and a surreal afternoon in Mexico will give him further cause to question reality.

The Briton, who wrapped up his third title in Austin on Sunday, was serenaded by a Mariachi band, played table football in a wrestling ring with a masked fighter and was handed a beaded skull as a gift on Wednesday.

“Every day I am waking up and I’m like, ‘I can’t believe it. I’m a three times world champion,'” the Mercedes driver told reporters after an event organised by team sponsor Puma for employees.
“I don’t know when it’s going to kick in but I’m definitely enjoying it,” continued Hamilton, who earned his 10th victory of the season in Texas.

“When people tell me three, I have them repeat it because it sounds really cool.”
The afternoon’s activities gave him plenty more opportunities to think he was still dreaming.
He had arrived at the Arena Mexico, the venerable home of Lucha Libre wrestling and boxing venue for the 1968 Olympics, to be serenaded on stage to the strains of ‘Cielito Lindo’.

Handed an oversized sombrero, which he declined to wear, the champion was then invited to play table football inside the ring against the renowned ‘Mistico’, a masked ‘luchador’ in a shimmering cape.

Mexican national team striker Oribe Peralta joined in the fun, declaring the match to be his side America versus Hamilton’s favourite club, Arsenal.

After an exhibition fight, Hamilton stepped into the ring and threw himself sideways through the air at ‘Mistico’, who collapsed theatrically to the canvas and conceded defeat.

Hamilton was then presented with a skull — Sunday’s Mexican Grand Prix coinciding with Mexico’s ‘Day of the Dead’ holiday — and posed with it like a pensive Hamlet as photographers snapped away.
“I’ve seen this on TV, in movies, but to actually be there and be in the ring is really cool,” he said.

“They were talking about just doing a very simple manoeuvre but I wanted to really do it. Hopefully you were kind of impressed by my wrestling moves,” he grinned. “Maybe when I retire I’ll come back.”
After telling reporters that he loved tacos and his favourite movie was ‘Man on Fire’, an action thriller set in Mexico City and starring Denzel Washington, Hamilton turned his thoughts to Sunday’s race.

The grand prix will be the first in Mexico since 1992 and an unknown for all the current crop of drivers.

“I want to win the race … I’m going to keep pushing for sure. Especially when it’s a new circuit, you always want to be the one to put your stamp down and be the first,” said Hamilton.
“From the simulator, it looks fantastic.

“Very, very tricky and not just another track, because we’re very high it’s hugely demanding for us with the downforce and thin air,” he added. “It’s going to be physically probably one of the toughest races.”