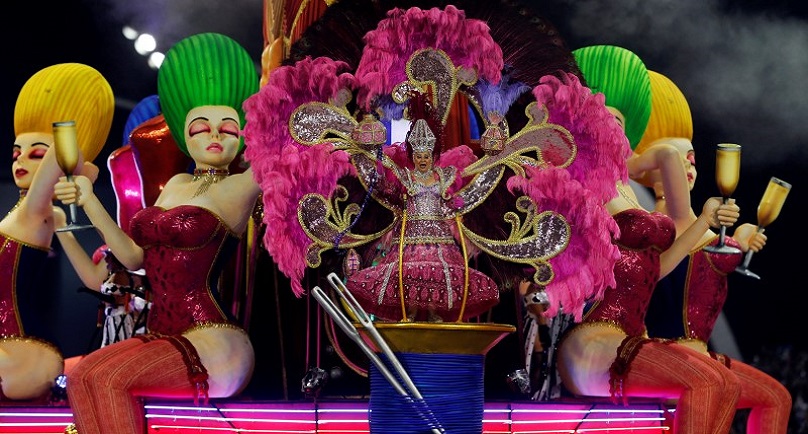 Image: A reveller parades for the Vai-Vai samba school during the carnival in Sao Paulo, Brazil, February 7, 2016. REUTERS/Paulo Whitaker

RIO DE JANEIRO (Reuters) – The worst health scare in recent history is not keeping Brazilians from their annual Carnival revelry, with millions of partiers swarming streets and some making fun of the mosquito that spreads Zika and other viruses.

Street processions, block parties and the televised, big-budget parades that are the hallmark of the festival moved into their second day on Sunday, even as Brazilian health officials continued to grapple with an outbreak that may have infected as many as 1.5 million people and could be linked to suspected deformations in more than 4,000 infants and unborn children.

“It’s one more thing to worry about,” said Juliana Araujo, a 48-year-old schoolteacher at a street party in Rio de Janeiro, where other problems, like an economic recession and impeachment proceedings against Brazil’s president, seemed distant concerns.

Recent news that traces of the virus had been identified in blood, saliva and other bodily fluids of patients known to have been infected with Zika would not do much to dampen a festival known for its fair share of casual sex, she predicted: “People aren’t going to stop having fun and hooking up.”

Over a million people hit the streets in cities like Rio, home to the country’s best-known Carnival celebration, and the northeastern capitals of Salvador and Recife, two cities hard hit by the outbreak.

Along with the usual cross-dressing, superheroes and other outlandish costumes worn by partygoers, some toyed with themes related to the scare. Outside a juice bar in Rio early on Sunday, three men dressed as mosquitoes mingled with other revelers, the names of maladies borne by the insect stenciled across their chests: “Zika,” “dengue” and “chikungunya.”

For some, the levity is welcome relief amid nonstop Zika headlines. After emerging in Brazil last year, the virus has now been locally transmitted in at least 30 countries, according to the World Health Organization.

Last week, scientists said they would investigate a report that an American in Texas had transmitted Zika to a sexual partner. On Friday, Brazilian researchers said they had found genetic material from the Zika virus in saliva and urine from two patients.

They said more research was necessary to determine if it can be transmitted by those fluids, but warned pregnant women, believed to be most at risk because of links between the virus and deformations in developing babies, to avoid the casual kissing of strangers common at Carnival.

Scientists have found genetic material from Zika virus in tissue and fluids taken from mothers and children in at least 17 cases of microcephaly, a deformation characterized by abnormally small heads that can also include brain damage. Researchers have yet to prove if the virus actually causes microcephaly.

For foreigners visiting Brazil, the scare makes them want to take precautions – but has not ruined a good time.

“I was scared coming out here,” said Martha Scofield, 23, a tourist visiting Rio from England. “But there’s not much you can do really. I’m going to come, have a good time, be careful, and I don’t plan to get pregnant.”

Obama on Trump victory: we are now all rooting for his success