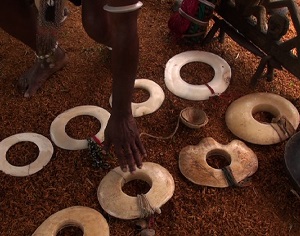 Fresh calls have been made by a traditional Chief in Yangoru, East Sepik, for the government to prevent the sale of traditional artefacts.

Eric Wangihou, the traditional Chief of Chiefs in Yangoru, has been vocal on the sale of traditional shell money in his area.

The shells are important and sacred in their culture. The size varies and it determines and values the identity of a man or woman in the community.

The traditional shell money is mainly used for bride price payment and compensation.

Traditional history cannot say how this big shell money is made but according to local folklore, was believed to have been made by unseen spirits.

The thin white shells are made from giant clam shells.

Today the existence and value of the shell money is still treasured in the Yangoru Saussia electorate.

However, people are now selling them to tourists.

The chief has called on the government to protect the sale of such traditional monies, including carvings and artefacts to tourists.

They have organised a program called ‘Yangoru Saussia Cultural Heritage’, aimed at teaching young children the importance of these shell money, culture and tradition.

Physicist Stephen Hawking, who conquered the stars, dies at 76

Michael Jackson’s ‘Thriller’ is first to sell 30 million in U.S.