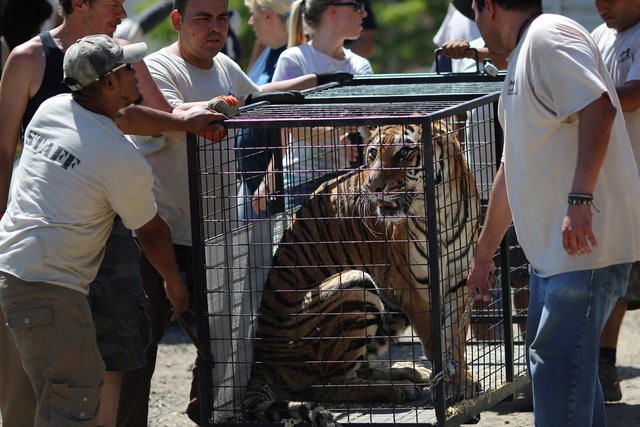 Image: A tiger is returned to its enclosure at the Wildlife Waystation after animals were evacuated during the approach of the Sand Fire in the Sylmar area of Los Angeles, California, U.S. July 27, 2016. REUTERS/David McNew

LOS ANGELES (Reuters) – A virtual Noah’s Ark of wild beasts and livestock has been relocated to save them from a massive wildfire burning north of Los Angeles in a region that is home to exotic animal sanctuaries and horse ranches.

Officials and volunteers at the Wildlife Waystation in the northern Los Angeles suburb of Sylmar moved about three-quarters of the sprawling facility’s 400 animals on Saturday, including dozens of large animals such as tigers, lions, bears and cougars, founder Martine Colette said in a telephone interview.

The animals were coaxed into cages by voice command and meat for bait, and then loaded onto trucks, vans and trailers, Colette said.

The so-called Sand Fire has charred 59 square miles (153 sq km) since it broke out on Friday in a mostly rural area around the community of Acton on the northwestern fringes of the Angeles National Forest.

Wildlife Waystation said it expects to return the animals to the Sylmar facility on Wednesday, since firefighters have made progress containing the blaze.

The creatures great and small, which were taken to other wild animal sanctuaries in Southern California, have been stressed by the move, Colette said. “They absolutely hate it, and it will take them several days, maybe as long as a week, to settle down when they finally come home.”

Most of the animals evacuated from the facility are small, including birds and lizards, that could easily be harmed by smoke, she said.

The fire also forced ranch and farm owners in the region to evacuate their livestock by trailer to a number of facilities. More than 300 horses, 165 goats, 33 pigs and two Brahman bulls were displaced by the fire, according to the Los Angeles County Department of Animal Care and Control.

About 10 miles (16 km) north of the Wildlife Waystation, officials at the Lange Foundation’s St. Bonnie’s Sanctuary in Canyon Country on Saturday evacuated more than 40 dogs, over 60 cats and 14 horses, a board member with the organization, Diane Nelson, said in a telephone interview.

Most of them were taken by car and van to one of the foundation’s centers in Los Angeles. The foundation saves animals from being euthanized at shelters.

Officials from two animal sanctuaries in the northern Los Angeles County region, the Gibbon Conservation Center that is home to arboreal apes, and the Shambala Preserve for big cats, said they were able to avoid moving their animals.

Teaching community through capoeira in a hardscrabble Rio slum

Germany cuts CO2 targets for industry ahead of Morocco talks