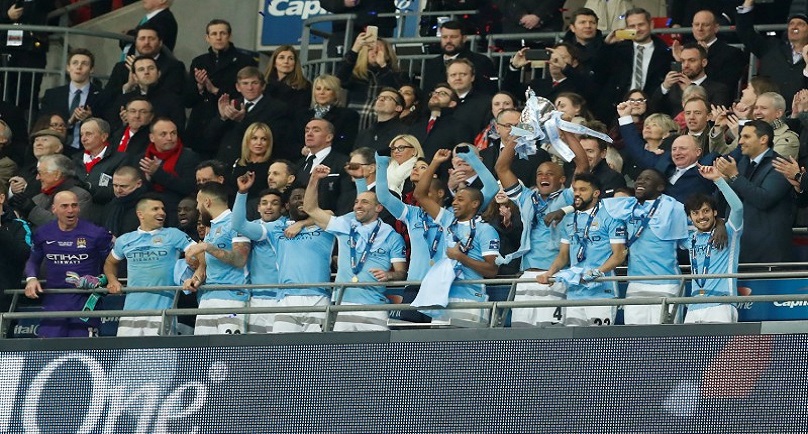 LONDON (Reuters) – Manuel Pellegrini will head to pastures new with at least one shiny memento of his final season as Manchester City manager after keeper Willy Caballero’s penalty shootout heroics sealed a League Cup final win against Liverpool on Sunday.

The Chilean will be replaced by Pep Guardiola at the end of the campaign but, whatever happens between now and May, he will be guaranteed an appreciative send-off after City triumphed 3-1 on penalties after the Wembley Stadium showpiece finished 1-1.

City were stretched to the limit by Liverpool but Juergen Klopp’s hopes of winning a trophy 143 days into his Anfield reign died when Caballero expertly saved spot kicks from Lucas Leiva, Philippe Coutinho and Adam Lallana.

It was a triumph for the 34-year-old Argentine keeper, whose selection ahead of first-choice Joe Hart had been much debated by City fans, and a vindication of Pellegrini’s continued trust in the man he had chosen to keep goal throughout the Cup run.

Yaya Toure supplied the final touch, stroking home the deciding kick to give City their second League Cup in three years under Pellegrini.

Fernandinho had given City the lead after 49 minutes when his shot slipped through keeper Simon Mignolet’s grasp but Coutinho levelled late on.

“If we carry on and work really hard there is light at the end of the tunnel, but tonight we feel rubbish,” a glum Klopp told reporters.

For Pellegrini, his much-criticised decision in fielding a second-string team in last week’s FA Cup hammering at Chelsea looks fully justified after a 3-1 win at Dynamo Kiev in the Champions League in midweek and now victory over Liverpool.

“That decision I took last week was very important to win these two games,” Pellegrini said.

For all the pre-match razzamatazz, the first half was forgettable, barring a superb save from Mignolet to turn Sergio Aguero’s shot against a post.

Aguero had led Liverpool centre back Mamadou Sakho a merry dance in the build-up, the French centre back still dizzy from a clash of heads with team mate Emre Can that eventually meant Klopp had to replace him with Kolo Toure.

City went ahead when the otherwise impressive Mignolet let Fernandinho’s shot from a tight angle squirm through his grasp.

Raheem Sterling, loudly booed by Liverpool fans throughout, then missed a sitter that could have killed off his old club.

Aguero was denied a clear penalty and Mignolet then redeemed himself with a low save to keep out the Argentine’s shot.

Klopp sent on Lallana with 20 minutes remaining and the England midfielder was involved in the equaliser.

He prodded Daniel Sturridge’s cross against the post but the ball rebounded to Coutinho who fired past Caballero.

Mignolet redeemed himself, denying Yaya Toure and Fernando in the final minutes of normal time and the Belgian also thwarted Aguero in the first period of extra time with a reflex stop.

Caballero made an even better stop to keep out Divock Origi’s point-blank header.

Liverpool drew first blood in the shootout when Fernandinho’s spot kick hit the post but Caballero’s three saves, which saw Hart giving his understudy a big hug afterwards, had their fans heading out before Toure’s clincher.