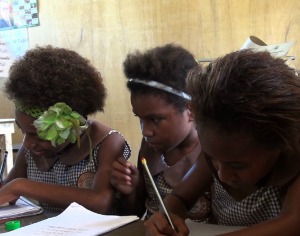 Butuka Elementary School in the Moresby – South Electorate has re-opened after a ban was lifted by NCDC Health yesterday.

NCDC Health closed the school for three weeks as they lacked proper toilet facilities. The school was forced to build pit toilets as an alternative.

The school is also awaiting a committement made by Moresby – South MP, Justin Tkatchenko, for contractors to help rebuild proper facilities.

As a result, 500 plus elementary students will have to make do with these two pit toilets built in the past three weeks, after the school’s closure.

The school authorities are now calling on Moresby South MP, Justine Tkatchenko, to honour his commitment for contractors to rebuild the school toilets.

The member visited the school after it was closed and announced that the toilets will be demolished and new ones built.

Butuka Elementary Deputy Head Teacher, Iamuia Apawa, says although the school has reopened, there is still a need for maintenance and construction of classrooms to cater for the overcrowding.

Mrs Apawa says there are two classes taught in a classroom, making it difficult to teach students effectively.

Another problem faced by the school is water shortage. The school needs a water tank to ensure constant supply and ensure students can wash their hands after using the pit toilets.

The school administration is worried that despite setting up the pit toilets, overcrowding will be a health risk for students.

Meanwhile, Moresby – South MP, Justin Tkatchenko, in a statement said Butuka was not part of its school projects for this year, but rather 2016.

At this stage, Moresby South District Development Authority is looking at ways where it can draw from, to assist and ease the school’s issues. The 2015 allocation is yet to be received and this is what the office for Moresby – South Electorate is waiting for.