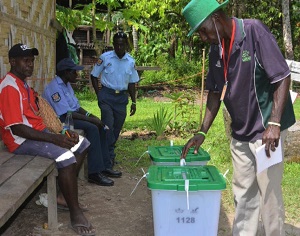 Within one week, polling for the third General Election has now been completed in twenty-two constituencies throughout the Autonomous Region of Bougainville.

Acting Electoral Commissioner, George Manu, is satisfied with the conduct, based on reports from returning officers that only eleven constituencies are expected to complete polling this week.

However, in Central Bougainville, polling is expected to be completed by tomorrow in Terra, Rau, Ioro and Eivo-Torau.

Bougainville’s Acting Electoral Commissioner thanked Bougainvilleans and the Bougainville Police Service for their cooperation, in making this this election, free, safe and fair.

In the final week of polling, Mr Manu appealed strongly to eligible voters to participate in this election, by casting their votes.