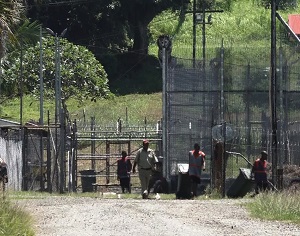 Water supply cuts to the Buimo Jail in Lae may prove devastating to the correctional institution, one already facing problems that include overcrowding and a shortage of rations.

In February, overcrowding was said to have caused a breakout at the jail where 87 prisoners escaped and 12 prisoners were shot and killed by police.

It was also sighted that prisoners were kept under poor hygienic conditions.

Buimo’s cumulative problem with overcrowding jail blocks will now take new heights in the weeks to come when prisoners don’t have water.

Yesterday, Water PNG made sure that water wouldn’t flow from any taps within the Buimo compounds by cutting supply after a K1.6 million bill wasn’t settled.

The prison holds around 700 prisoners in a facility built to hold lesser numbers.

“With the current shutting down of the water supply it will affect us, we 700 prisoners and 800 staff members including their families,” Buimo Jail Commander, Felix Namane said.

Namane has been in office for less than a month and already faces these challenges.

He is now pleading with CS headquarters in Port Moresby to pay for the outstanding bills.

“The Commissioner must do something to pay the bill.”

The existing poor state of the Buimo Jail has already caused many reported escapes in the past.

The most recent was in February when 87 prisoners escaped from Buimo. 12 prisoners were later shot and killed by police.

Four Children Killed in Southern Highlands after a 7.6 Magnitude Earthquake