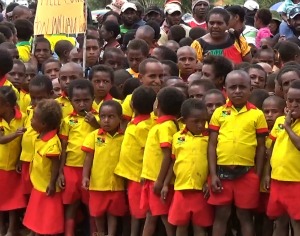 Southern Highlands Governor, William Powi, has told the people of Kuare in the Ialibu Pangia district that a new high school will be built to cater for the growing population.

Powi made this statement while presenting a cheque for K1 million, which will assist in establishing the new high school.

The governor said his task is to provide the resources, however the initial funding will not be enough to cater for the needs of the people.

He said as part of his campaign promise in the 2012 general election, he has delivered two impact project for the people of Kuare: the Kagua-Kuare Road and the Kuare High School, of which he provided funding K5 million for the two projects.

With 11 high schools in the province, this will cater for the approximately 50,000 elementary students within the area, as well as the 40,000 future high school students currently studying at the primary level.

“Nine High schools with 4,600 students is not enough, I’ll bring seven more high schools to cater for the 90,000 students and one of them is this, the Kuare High School,” Powi said.

He added that K1 million of funding would also be allocated for the relocation of the Kuare Primary School ,with the initial funding of K500,000 to be provided immediately.

The construction of a new LLG chamber, and fixing the Kuare Health Centre when funds become available, are also on Powi’s to-do list.