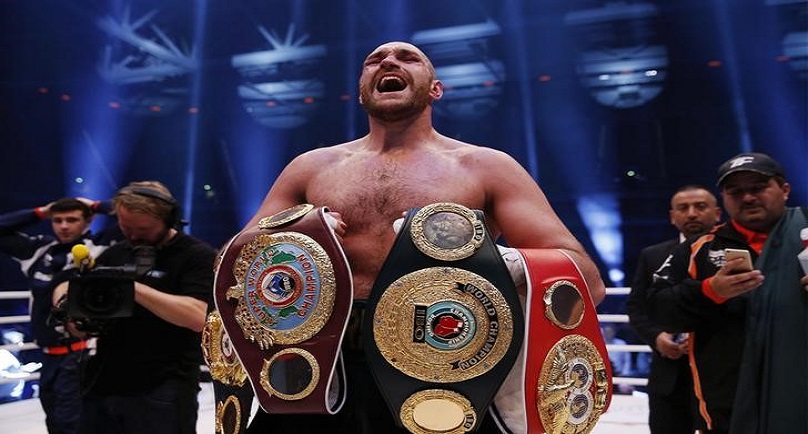 Underdog Tyson Fury caused a huge boxing upset on Saturday, stunning Wladimir Klitschko with a points victory to snatch the champion’s four titles and become the first Briton to hold a world heavyweight crown since 2011.

Undefeated Fury, who improved his record to 25-0 and now has the WBA, WBO, IBF and IBO belts, was never troubled by the 39-year-old Ukrainian who suffered his first loss in 11 years and has already demanded a rematch.

“He’s been a great champion, but every good dog has its day,” challenger Fury told a 50,000 crowd at Duesseldorf’s Esprit Arena.

“Tonight is that start of a new era. I will be the most charismatic champion since Muhammad Ali,” he said before serenading his wife in the crowd with a song by American band Aerosmith.

“I worked for six months for this in the gym, it’s a dream come true,” Fury said while draped in his new world title belts and unable to hold back the tears.

The fight, postponed once due to a Klitschko injury, almost did not take place with Fury’s team complaining earlier on Saturday over the thick ring canvas that they claimed limited his movement.

Modifications were made and Fury, quick, despite his 2.06 metres, was better from the start, showing no problems with the new canvas.

He kept landing left-right combinations with Klitschko, not used to fighting taller men than him, struggling with Fury’s reach.

Klitschko managed to get close with a few good left jabs in the second round but Fury landed a powerful right, pushing the Ukrainian back.

Fury, constantly changing between southpaw and orthodox stance, kept chipping away at Klitschko’s defences with his combinations and by the eighth round the champion was bleeding from a cheek wound.

Fury, who shed 32 kilos in five months to get in shape for the fight, landed a bruising left uppercut in the ninth that wounded Klitschko’s right eye.

Sensing the titles slipping away, Klitschko threw everything he had in the final round in search for a knockout but ended up losing on all three of the judges’ scorecards, putting an end to his winning run that stretched back to 2004.

“Tyson really stepped on the gas,” said a disappointed Klitschko, fighting in front of a home crowd with his base in Germany.

“I was missing my speed today and I struggled with his reach.

“I knew I was behind and had to land the punches. I tried but it did not work.”