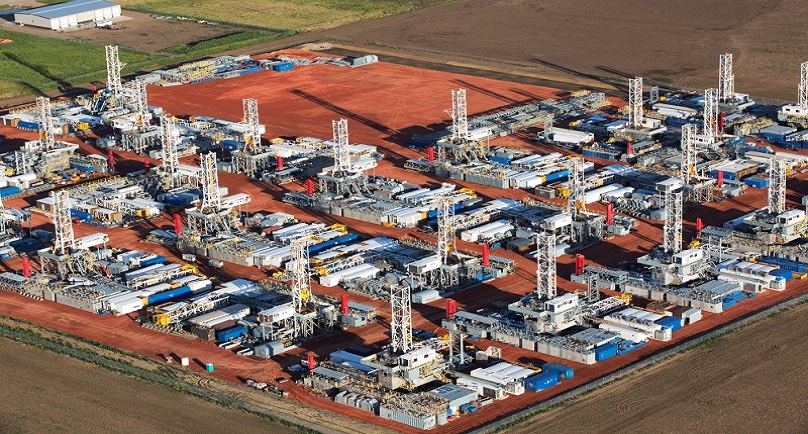 Image: Stacked rigs are seen along with other idled oil drilling equipment at a depot in Dickinson, North Dakota June 26, 2015. REUTERS/Andrew Cullen

By Henning Gloystein
SINGAPORE (Reuters) – Brent crude prices fell on Monday to their lowest since 2004 on renewed worries over a global oil glut, with production around the world remaining at or near record highs and new supplies looming from Iran and the United States.

Both benchmarks are down more than two-thirds since mid-2014 when the rout began.

“The U.S. oil rig count bounced back this week, up by 17 (to 541), putting an end to four consecutive weekly declines,” Goldman Sachs said.

“The increase in rig count even in a low crude oil price environment suggests shale producers are committed to maintaining production levels. The resilient production data reflect rising U.S. crude stockpiles, which have surged to 491 million barrels, the most for this time of year since 1930,” ANZ bank said.

The U.S. glut adds to global oversupply as the main producers, including Russia and the Organization of the Petroleum Exporting Countries (OPEC), pump hundreds of thousands of crude every day in excess of demand.

Russian production has surpassed 10 million barrels per day (bpd), its highest since the collapse of the Soviet Union while OPEC output also remains near record levels above 31.5 million bpd.

Adding to the existing glut is that new oil is likely to become available soon, with Iran hoping to ramp up sales in early 2016 once sanctions against Tehran are lifted.

Iran will export most of its enriched uranium to Russia in coming days as it rushes to implement a nuclear deal and secure relief from international sanctions, Tehran’s nuclear chief was quoted as saying over the weekend.

This comes only days after the U.S. voted to lift a 40-year-old ban on crude exports which could see some of its excess production dumped on the global market.

On the demand side, there are also bearish factors as most of the northern hemisphere is experiencing an unusually mild start to the winter due in part to the El Nino weather phenomenon, denting heating oil demand.

With the Virus Surging, Britain Returns to a Lockdown