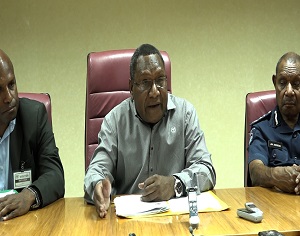 The Bank of PNG (BPNG) today announced new laws to combat money laundering, and the possible financing of terrorists in the country.

Governor of BPNG, Loi Bakani, says this move comes as a report by concerned authorities shows that PNG has had no strict measures in place over the past 30 years.

Financial institutions, business houses and government entities will be closely monitored as of this year.

Bakani announced that the Financial Analysis and Supervision Unit, or FASU, will be handling the case before the matter is handed to Police for further investigation.

Bakani says penalties will be severe, and agencies will be working closely to combat such illegal activities.

The five new laws that will be implemented are:

Under the Proceeds of Crime Act, cases involving cross border movement of currency will be dealt with as well.

All these measures are said to erase PNG from the greylist and foster tougher penalties and laws to safeguard PNG’s financial system, and combat money laundering and the financing of terrorism.

A major public awareness campaign will be carried out by BPNG in the coming months.

Thousands Flock to Walk on Kumul Flyover in Port Moresby