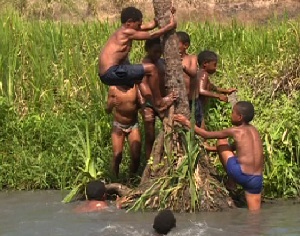 A 13 year old boy was found dead at the Morata swamp this morning.

The boy was missing since Wednesday afternoon.

Police have been to the scene of the incident and have started investigations into the possible drowning.

The victim was part of a group of boys who went swimming, but did not return home that evening.

His body was found at 6am this morning, by four of his friends and his parents.

The death was reported to the Waigani police station. Members of the Criminal Investigations Division, with the assistance of the Australian Federal Police, arrived at the scene around 9am.

While this is being treated as a possible drowning, police will continue with their investigations to confirm the cause of death.

The body of the victim has been brought to the Port Moresby General Hospital morgue.

When EM TV News arrived at the scene, relatives and the group of boys that the victim spent yesterday with were there to recount how his body was found.

While investigations into the death continue, the victim’s uncle, Nixon Tawanda, said the government needs to look into the water needs of this community.

He said the pool of water where his nephew’s body was found is the only source of water the community has, which is a pool that is fed by waste water from the city. He demands that the government, especially Moresby North East MP, Michael Malabag, and NCD Governor Powes Parkop, to look into ensuring water supply is accessed by the community.

He said his nephew met his fate while taking time out of school due to no water.