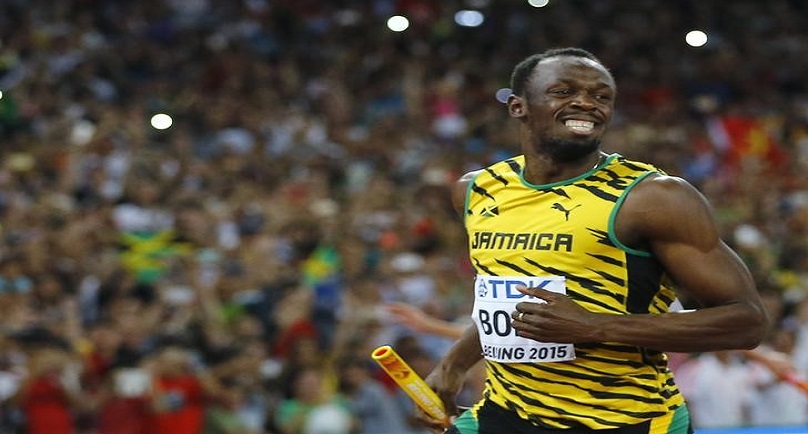 Image:Usain Bolt of Jamaica smiles after running the anchor leg to win the men’s 4 x 100 metres relay final at the 15th IAAF Championships at the National Stadium in Beijing, China August 29, 2015. REUTERS/Kai Pfaffenbach

“The fact that I’ll be competing this year it’s a motivation to work even harder to make sure when I compete here, I will be in top form to run fast times to show the country that I’m ready to go to Rio (Olympics) and do great things,” Bolt told Reuters.

Bolt said it was a well-positioned meet for most athletes because it is just before Olympic trials so they can go out and compete and know what they need to work on.

Glen Mills, chairman of the organising committee of the meet and the coach of Bolt and others at the Racers Track Club, said former world record holder Asafa Powell and 2012 Olympic sprint medallists Yohan Blake and Warren Weir were among other athletes expected to compete.

Mills said he hoped the event would grow into a circuit of eight or 10 meets in the North American Central American and Caribbean Athletics Association (NACAC) and had the support of NACAC president Victor Lopez.

Meanwhile, Bolt is again setting his sights on dominating a third successive Olympics.

“Training is going well you know, I’ve really stepped up the tempo,” he said. “I was out for a bit because of an ankle problem, but everything is going smoothly now.

“I’m really focussed and I really want it, so I’m just pushing myself, working hard and hopefully my coachwill give me the go ahead to compete very soon,” Bolt said.

Mills again expects Bolt to dominate at the Games.

“The preparation is going to be going right down to the Olympics because he lost valuable time, but he’s back in training and we are pushing the envelope,” he said.

“Usain is highly motivated and he’s a special athlete so we’re expecting that come the right time he’ll be able to go out there again and do his thing.”

Ronaldo tired of Messi comparisons, says ‘not a fake person’