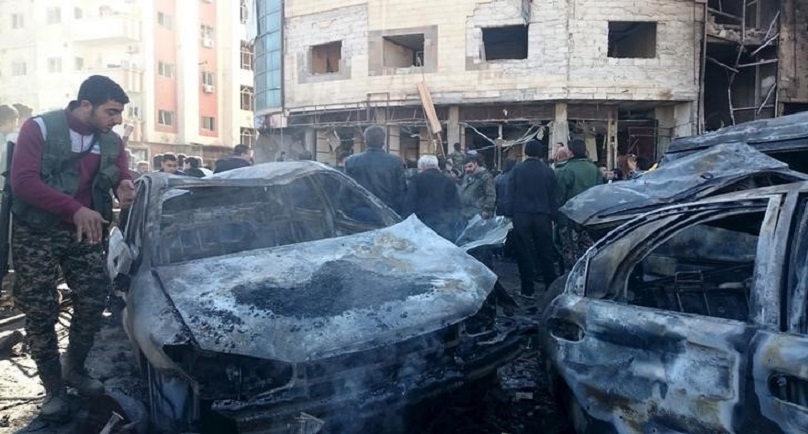 By Laila Bassam and Suleiman Al-Khalidi

BEIRUT/AMMAN (Reuters) – At least 60 people were killed, including 25 Shi’ite fighters, and dozens wounded on Sunday by a car bomb and two suicide bombers in a district of Damascus where Syria’s holiest Shi’ite shrine is located, a monitor said.

Sunni fundamentalist Islamic State claimed responsibility for the attacks, according to Amaq, a news agency that supports the group. It’said two operations “hit the most important stronghold of Shi’ite militias in Damascus”.

The Syrian Observatory for Human Rights said the casualties were expected to rise from the suicide attacks in Sayeda Zeinaba, a district of southern Damascus where the Lebanese militant group Hezbollah and other Iraqi and Iranian militias have a strong presence.

Rami Abdulrahman, head of the Brit’sh-based Observatory, said the suicide bombers had targeted a military bus carrying Shi’ite militias who were changing guard there.

The explosions occurred as representatives of Syria’s government and its divided opposition began convening in Geneva for the first U.N.-mediated peace talks in two years.

Syrian Ambassador Bashar Jaafari, head of the government delegation at Geneva, said the blasts in Damascus just confirmed the link between what the government says are a Saudi-led and funded Islamist “opposition” and terrorism.

Two suicide bombers then blew themselves up nearby as people were being rescued. The authorities put the dead at 45 people.

“Bodies were still being pulled from the wreckage,” a witness told state news channel Ikhbariyah.

The heavily populated area in the south of the city is a site of pilgrimage for Shi’it’s from Iran, Lebanon and other parts of the Muslim world.

Syrian Prime Minister Wael al-Halaki was quoted as saying the attacks were prompted by “terror groups” who sought to “raise their morale after a string of defeats” by the army.

The United Nations has said it is aiming for six months of talks, first seeking a ceasefire and later working toward a political settlement for Syria. The nearly five-year conflict has killed more than 250,000 people, driven more than 10 million from their homes and drawn in global powers.

The Sayeda Zeinab shrine area witnessed heavy clashes in the first few years of the war but has since been secured by the Syrian army and Shi’ite militias led by Hezbollah, which has set up protective roadblocks around it.

The shrine houses the grave of the daughter of Ali ibn Abi Taleb, the cousin of Prophet Mohammed, whom Shi’it’s consider the rightful successor to the prophet. The dispute over the succession led to the major Sunni-Shi’ite schism in Islam.

Iraqi and Iranian Shi’ite militia groups that have volunteered to fight Sunni Islamist radicals in Syria in a conflict that has heavy sectarian overtones often say they are coming to Syria to defend the shrine.

Rebels says the area is the first destination of thousands of Shi’ite militias drawn from Iran to Afghanistan alongside neighbouring Iraq where they are based before heading to fight in battlefields across the country.

Shi’ite militias from the region led by Hezbollah have played a crucial role in covering the shortfall in manpower faced by Syrian President Assad’s overstretched army during nearly five years of conflict.