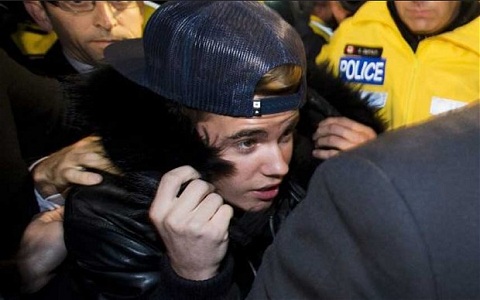 Canadian Pop Sensation, Justin Bieber has surprisingly turned himself in, at Toronto Police Station to be charged for the assault of a limousine driver that played out last month.

According to reports, Biebs was arrested last Thursday for DUI and resisting arrest, among other charges. He was released on a standard bail of $2,500. Court records show that he has pleaded not guilty to these charges.

That weekend, the Baby singer was reported to have spent the weekend at Panama with R&B singer and his mentor Usher, among other loved ones, where he got, what seemed like an intervention.

Bieber’s rocky start off to 2014 seems to be taking a turn for the better.

According to The Guardian, the 19 year old Pop Sensation turned himself in to be charged for the assault of a limousine driver December 30, last year.

CNN reports, Justin allegedly attacked a limo driver on the back of the head rather than ordering the attack. Bieber had attended a Toronto Maple Leafs hockey game at the Air Canada Centre earlier that evening.

He turned himself in on Wednesday evening, and spent about two hours in the Toronto Police Station and had to use a rear exit due to the crazy paprazzi and screaming fans who were outside the Station. He is set to appear in court 10th of March.

His LA lawyer said the charge was “the equivalent of a misdemeanour in the United States.”

“For all those asking @JeremyBieber and @pattiemallette love their son. Stop passing judgement on a situation u dont understand. i ask people to be kind and hope for the best in people. Not assume the worst. Thanks”.

The worst part is, this all palyed out an hour after, Justin’s new music video “Confident” was released.

All eyes turned to watch Justin to be charged for assault, when they should have been watching his new Music Video “Confident”.