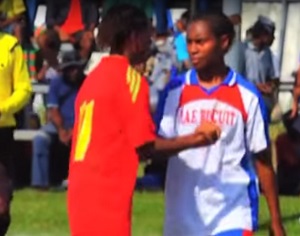 A delay in proceedings as semi final spots still had to be confirmed in the men’s division of the BESTA Cup.

In the women’s finals however, LFA had already booked for themselves a grand final berth and awaited the outcome between Lahi and Madang.

After a one all draw yesterday, today’s rematch had a lot more intensity.

Both teams have quality about them – Lahis right back Joylene Aiea, who played for PNG during the Pacific games features, and Kesai Steven as well as PNG centre back, Dorcas Sesevo, for Madang.

Earlier Madang men’s coach Michael Steven,had praised the women’s team. But it was Lahi who started off the strongest, pushing forward along both flanks, and when Madang had their first attempt inside the penalty area, desperate defence kept Lahi in.

By the end of regulation time, it was still nil all and they headed into Extra time.

Confusion in the Madang Defence almost gifted Lahi, and while Madang tried from range, Lahi’s dominance continued, as Madang could only resort to clearances, as they hoped to survive for a shootout.

Survive they did, Madang with the first attempt, Lahi matching but misses by both second penalty takers would place their teammates under enormous pressure as well. Another miss by Madang did not help and it was 2-2 with Lahi’s last kicker in the spotlight.

In the end, the seven penalty takers did enough, and it will be an all Morobe final, with Lahi to meet a rampant LFA, who also had to go through a shootout the day before to qualify.