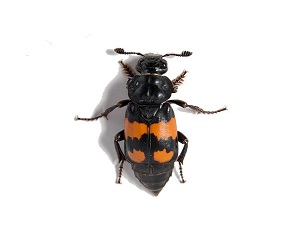 Image: The burying beetle Nicrophorus vespilloides is pictured in this undated handout photo provided by Johannes Stökl. Scientists described on March 22, 2016, how these beetle Nicrophorus vespilloides females employ an anti-aphrodisiac chemical known as a pheromone during a three-day period critical for raising offspring to tell the male she is temporary infertile and prevent him from trying to copulate. REUTERS/Johannes Stokl/Handout via Reuters

WASHINGTON (Reuters) – When a female “burying beetle” is focused on caring for babies and not making new ones, she releases a chemical signal to her libidinous mate that says in no uncertain terms, “Honey, I’m not in the mood.”

Scientists described on Tuesday how these females employ an anti-aphrodisiac chemical known as a pheromone during a three-day period critical for raising offspring to tell the male she is temporary infertile and prevent him from trying to copulate.

The study focused on a beetle species, Nicrophorus vespilloides, known for burying carcasses of small animals like birds and rodents as food for their larvae. It provides insight into how animals change their behavior to provide care for their young, in this instance favoring parenting over sexual activity to produce new offspring.

“Our study helps to understand animal family life and how it is coordinated between family members,” said biologist Sandra Steiger of Germany’s University of Ulm, who led the study published in the journal Nature Communications.

“It is kind of intriguing that such mechanisms exist in animals and that animal parents synchronize their mating and parental-care behavior for their own benefit and that of the children,” Steiger added.

Burying beetles are found mainly in temperate regions of Europe, Asia and North America. The species in this study is up to about eight-tenths of an inch long (2 cm) with a black body marked with bright orange patches.

The researchers studied about 400 beetles collected from a forest in Germany. A male and a female form a breeding pair, although they do not stay together for a lifetime.

Female burying beetles are temporarily infertile shortly after the birth of offspring during a three-day period when the babies cannot feed themselves. During this period the female beetle releases the pheromone that makes the male abstain from copulating with her, allowing both to spend their time caring for the developing larvae.

“It certainly makes sense,” Steiger said. “Why waste time and energy on copulation when she cannot produce eggs anyway and when it is necessary to raise the current offspring?”

The beetles apply antimicrobial secretions to suppress bacterial and fungal growth on carcasses they bury. After hatching, larvae crawl to the carcass and both parents feed them regurgitated, pre-digested carrion. The parents also defend the brood from predators and others of their species.