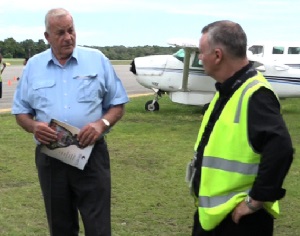 His presence was acknowledged by some of the airline managers, and he was later taken on a tour in the new aircraft.

In an interview with EMTV, Sir Peter said, “Although the company’s decision was tough, it was for its best interest, and for travelling passengers.”

“I have nothing, but praise the management for taking the initiative to develop the aviation and tourism in Papua New Guinea.”

With more airlines, comes lower airfares and accommodation, meaning the market is accessible at a more affordable cost.

Sir Peter thanked the company for opening routes that connects sectors like Madang with the Highlands and New Guinea Islands regions, rather than going through Port Moresby.

“The strategy that was used marks a new era for the company in expanding services, to people connecting people.”

“With PNG Air and its new aircrafts, there will be more competition,” he said.

Sir Peter said the idea behind this is to promote domestic tourism and market products.

Sir Peter called on the National Government to ensure tourism is developed on the provincial level and not only in cities like Port Moresby.