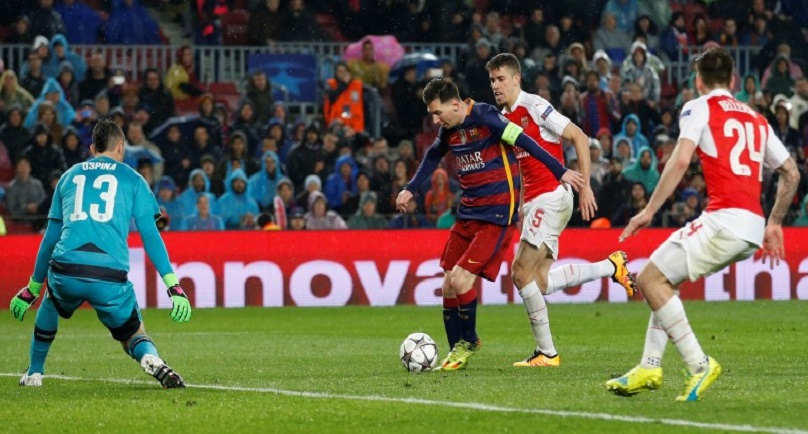 BARCELONA (Reuters) – Barcelona’s dynamic attacking trio of Neymar, Luis Suarez and Lionel Messi were too strong for Arsenal as all three scored in a 3-1 victory on Wednesday that sent the Spanish side into the Champions League quarter-finals 5-1 on aggregate.

Brazil’s Neymar opened the scoring in the first half as the home side dominated the early play, but Arsenal’s Mohamed Elneny curled in an excellent finish to spark life into the visitors after the break.

Suarez, however, launched himself into the air to meet a Dani Alves cross and send a superb volley into the top corner to deflate the English side, who have now been knocked out of the tournament in the last 16 for six successive seasons.

The mercurial Messi rounded off the scoring with a trademark chipped finish two minutes from time as the defending champions extended their record-breaking unbeaten run to 38 matches in all competitions.

“We know we need to attack and defend at the same level if we want to win,” Barcelona coach Luis Enrique told reporters. The La Liga leaders remained on course for a second successive treble and their coach is not concerned about who they face in the last eight of Europe’s most prestigious club competition.

“The only team I want to keep away from us is Barca and I think we have no chances to meet them,” he joked.

The defeat will increase the pressure on Arsenal manager Arsene Wenger, whose side are 11 points adrift of leaders Leicester City in the Premier League and exited the FA Cup last weekend.

“We had our chances, but we couldn’t take them,” Wenger said.

“But we have to say well done to Barcelona. They have two or three players who transfer normal life into art.”

Barcelona served notice of their intent when Arsenal keeper David Ospina was forced into a superb save to deny Messi, but the reprieve was short-lived as the hosts took the lead through Neymar’s side-footed finish after 18 minutes.

Arsenal had lost possession playing out from the back before Suarez angled a perfectly-weighted pass into the path of Neymar to slide the ball past Ospina.

Former Barcelona forward Alexis Sanchez fluffed the visitors’ best chance when he headed wide, but Arsenal continued to press and levelled six minutes into the second half when Elneny bent a sweet finish into the top corner from 20 metres.

Just when it looked like Arsenal might spring a surprise, however, Suarez’s acrobatics finished the tie before Messi burst into the box and lifted the ball calmly into the net to cap another superb individual display.

“We knew they were going to go and take the game to us,” Suarez said.

“In the end we proved we are strong here and made home advantage count.”

Australia players sent back to states, Bangladesh tour in limbo