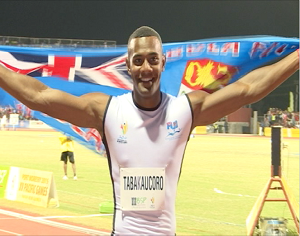 After winning Gold in the Men’s 100m and 200m, he has set his sights on the Olympics in Rio next year.

Ratu Banuve Tabakaucoro has now set his sights on making it to the 2016 Rio Olympics, after a successful performance on the tracks at the Pacific Games, setting a new record in the men’s 200 metres and winning gold in both the 200m and 100 metres.

The sprint king of the Pacific is looking to qualify for the Olympics, at the world championships in China.

From the times clocked in PNG, Tabakaucoro still has 0.03seconds to shave off, to qualify.

Banuve was extremely moved by the level of support he received whilst in Papua New Guinea, and said that the 2015 Pacific Games was by far the best competition he had taken part in.