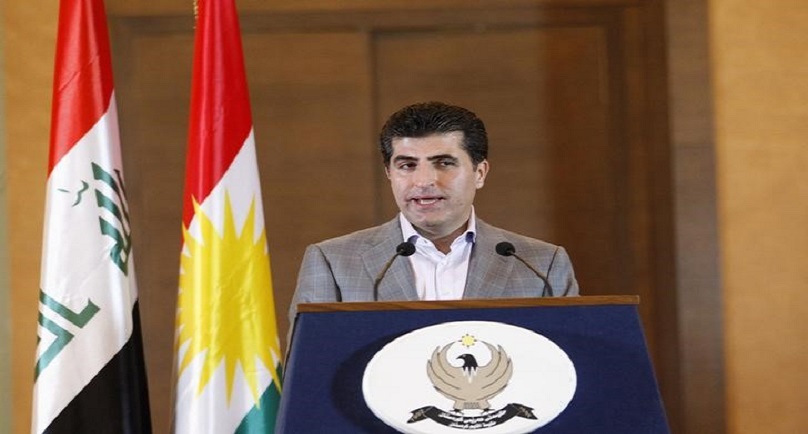 Image: Iraq’s Kurdistan Prime Minister Nechirvan Barzani speaks to the media after voting in Arbil, capital of the autonomous Kurdistan region, about 350 km (217 miles) north of Baghdad, September 21, 2013. Kurds went to the polls on Saturday to elect a new parliament in an election that is being dubbed as the most crucial in the history of Iraqi Kurdish political powers, with potential to change the political structure of the next parliament and government cabinet.About 1,129 candidates representing 32 political entities are competing for 100 parliamentary seats. Other nominees representing Christian, Turkmen and Armenian minorities in the region are competing for 11 additional seats. REUTERS/Thaier Al-Sudani (IRAQ – Tags: ELECTIONS POLITICS)

BAGHDAD (Reuters) – A delegation from Iraq’s cash-strapped Kurdistan region agreed on Sunday with the government in Baghdad to cooperate on reforms aimed at dealing with an acute economic crisis afflicting them both.

The Kurdistan Regional Government (KRG) and federal authorities in Baghdad rely heavily on oil export revenue and have been hit hard by the global slump in crude prices.

Relations between the two sides have been strained in recent years by ongoing disputes over revenue sharing, the budget and the authority to export oil.

“We think the meeting was positive considering the nature of the problems and contentious issues still lingering between both sides,” Abadi’s spokesman Saad al-Hadithi said after the talks.

Further meetings would now be held on a regular basis, he added. The previous such meeting was last July.

Kurdish officials have warned in recent weeks that their region faces an economic collapse.
Kurdistan enjoyed an economic boom in the wake of the United States-led invasion that toppled Saddam Hussein in 2003, receiving a share of the revenue from Iraq’s rising oil exports.

But Baghdad cut funding to the region in 2014 after the Kurds, in pursuit of economic independence, built their own pipeline to Turkey and began exporting oil without federal government approval.

The KRG has since increased independent oil sales to more than 600,000 barrels per day (bpd). But with depressed prices and a bloated public payroll, it is now five months in payment arrears and deeply in debt.

Baghdad has projected a budget deficit of 24 trillion dinars ($20.41 billion) for 2016. As a sovereign state, however, it has more options than Kurdistan to deal with an economic crisis.
Iraq’s Finance Minister Hoshiyar Zebari told Reuters last week the crisis was forcing Kurds to consider reviving a deal with Baghdad to reinstate the region’s budget share in return for exporting oil under state auspices.

Spokesman Hadithi gave no indication that was discussed in Sunday’s meeting.
($1 = 1,175.9000 Iraqi dinars)