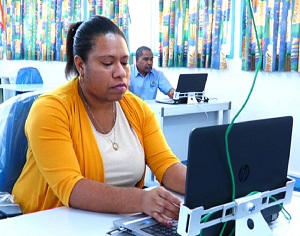 Pilots and aircraft engineers in PNG will now be able to take licencing exams in the country thanks to the opening of an E-centre at the Civil Aviation Safety Authority (CASA).

Apart from ensuring a fast turnaround of results, a key benefit of the E- centre will ensure the aviation industry in PNG will be able to produce licences, which are “recognised, accepted and transferable worldwide.”

Wilson Sagati, CEO of CASA, said a significant benefit would be financial help.

“Papua New Guineans don’t have to go to Australia; travel cost has been a significant cost for them, obtaining their licences,” he said during the launching today.

The Civil Aviation Minister, Davis Steven, who said this is one of the many small but significant milestones that has happened within the industry in recent times, officially opened the E-centre.

“In the aviation sector we are promoting the use of technology across the value chain. We believe this will enable PNG with its vision to be a Pacific hub and to continue to deliver seamless customer centered services,” Davis told industry stakeholders present at the launch.

An industry representative, Captain Samiu Taufa of Air Niugini, said this is a definite boost to the industry.

“Having international standards of Australia and New Zealand brought here to PNG elevates the system of our safety as well, which was a question in recent audit of PNG a few years ago. CASA PNG have taken great strides in advancing the industry forward,” he said.

He added that the fast turnaround time of results, which will be within an hour of an exam ending, is welcome news.

“I had to wait for my results and that’s a bit nerve wrecking, and if you fail you have to go back again in two months back to Australia,” Taufa said.

With the results, the exam candidates will also receive what is called a knowledge deficiency report, which they can use to better prepare for other exams.

The supplier of this electronic exam system is a company called ASPEQ based in New Zealand which was represented today by General Manager Bob Brownlie.

For now the E-centre can only cater for engineering exams, with definite plans to include pilots’ exams in the near future. Discussions are underway to include air traffic exams under this arrangement as well.

Sagati said it took nearly a year from the initial planning to the launch of this E-centre and CASA spent around NZ$80,000.

“This is something we can tap on as a stepping stone for building further success,” he said.