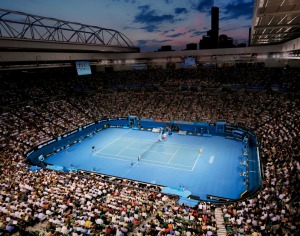 Former world number one, Rafael Nadal, is out of the Australian Open after being defeated by Fernando Verdasco in the first round.

Nadal, went down in in five sets at the Rod Laver Arena.

Second seed, Simona Halep, was knocked out of the first round of the Australian Open by Chinese qualifier, Zhang Shuai, yesterday, going down 6-4 6-3 to the inspired world number 133.

In his last Australian Open an emotional Lleyton Hewitt made it through to the second round in the men’s singles, the 34-year-old Australian beating compatriot James Duckworth 7-6(5) 6-2 6-4.

French Open champion, Stan Wawrinka ,shook off a stubborn early challenge from Dmitry Tursunov to advance to the second round when his Russian opponent retired injured.

The 2014 Melbourne Park champion then pulled away to a 3-0 lead in the second set before Tursunov sought treatment on his painful hip and when the fourth-seeded Wawrinka sealed the second set, the Russian retired.