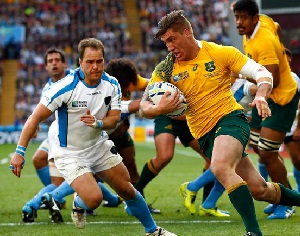 The Australian Wallabies registered one of the biggest upsets in the 2015 Rugby World Cup, against Uruguay last night in Birmingham, England.

Sean McMahon was first to open the scoreboard on the 6th minute, and a try set up by Kurtley Beale and Quade Cooper would place the Aussies in the lead 10 minutes into the first half.

Uruguay was given an opportunity to add points on to the scoreboard, after Cooper was yellow carded for an easily avoidable and arguable high tackle.

But, from the 25th minute onwards it was try after try for the Wallabies with skipper, Mumm scoring the Aussies third try.

And it would be the flying Fijian on the wing Henry Speight who scores the fourth try, giving the Aussies a bonus point.

However, despite their marginal win over Uruguay who has been absent in the RWC for the last twelve years, a number of lessons could have been learnt and picked up.

One of the biggest and most crucial lesson in ensuring their success in the RWC, would be game time and game style.

In their opening two matches, the Wallabies have shown their diversity in a team that has the potential to possibly win the Cup.

But Cheika will have to come down firm on a team he knows will gel well in their next encounter against England on Saturday.

Broncos Upset Panthers in Round 9 Game