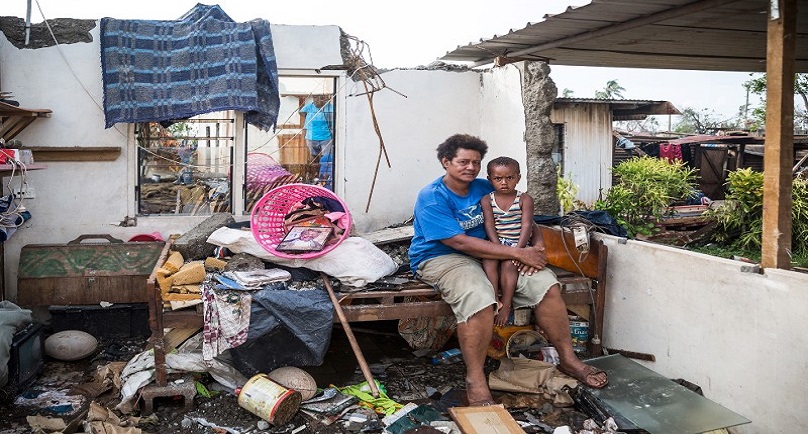 Image: Fijian woman Kalisi holds her son Tuvosa, 3, as she sits on a bed in the remnants of her home damaged by Cyclone Winston in the Rakiraki District of Fiji’s Ra province, February 24, 2016. REUTERS/UNICEF-Sokhin

SYDNEY (Reuters) – Australia is sending a relief ship to Fiji to assist in the recovery effort after Cyclone Winston, the worst ever recorded in the southern hemisphere, tore through the island nation last Saturday, as the sheer scale of the disaster becomes clearer.

The death toll from the category five storm remains at 42, according to a statement from Fiji’s National Disaster Management Office, although that figure is expected to rise.

Many communities remain without water and it could be weeks before electricity is restored, the statement said.

The scale of damage and loss is becoming apparent to authorities and aid organizations as communications are being gradually restored throughout the archipelago.

UNICEF spokeswoman Alice Clements said her organization now estimates that more than 62,000 Fijians are homeless and living in evacuation shelters.

“People are very resilient here and have got a solution to every problem, but there are just so many people who don’t have any options,” Clements said.

“As hard as we are working and as hard as the government is working the scale of this is going to outrun us all unless we get help,” she said.

Australia’s military vessel, HMAS Canberra, left on Friday and was expected to arrive in Fijian waters early next week.

It was carrying three helicopters and 60 tonnes of supplies, including water purification equipment and medical supplies.

The ship’s departure came as Australia’s foreign ministry said on Twitter that the first helicopter load of Australian aid had reached the hard-hit remote island of Koro on Saturday.

The Asian Development Bank’s South Pacific director, Rob Jauncey, told Radio New Zealand that Fiji’s economy would face losses of “tens of millions of dollars” because of the destruction of sugar crops and an expected drop in tourism.

The effects of Cyclone Winston were being felt on the eastern coast of Australia, more than 2,600 km (1,615 miles) southwest of Fiji, on Saturday.

Australia’s Bureau of Meteorology issued dangerous surf warnings and authorities closed many beaches in the states of Queensland and New South Wales as swells of up to 6 meters (20 feet) generated by Cyclone Winston battered the coast.

Panic! At the Disco holds off Adele for Billboard 200 top spot