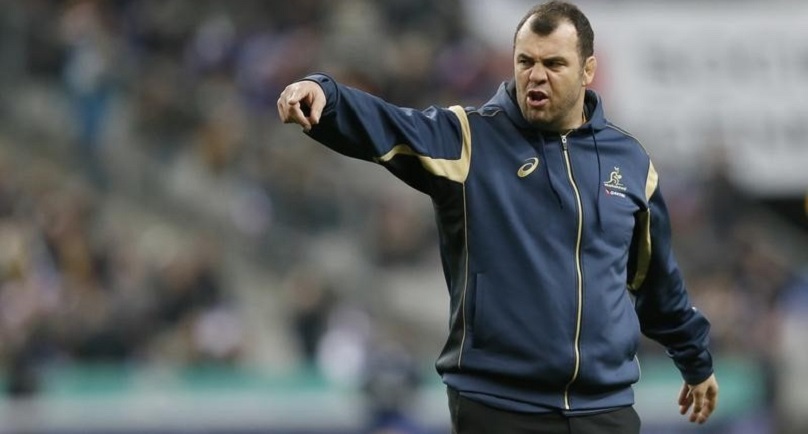 Image: Australian Wallabies head coach Michael Cheika directs his players during the warm-up before the rugby union test match against France at the Stade de France in Saint-Denis near Paris, November 15, 2014. REUTERS/Gonzalo Fuentes

CARDIFF (Reuters) – Australia coach Michael Cheika has opted for twin openside flankers in David Pocock and Michael Hooper for their Rugby World Cup Pool A opener against Fiji at the Millennium Stadium on Wednesday.

Finally revealing his hand after chopping and changing his team in the run-up to the tournament, Cheika included Pocock at number eight and Hooper in his normal number seven shirt as he did for the victory over the All Blacks in early August.

Bernard Foley gets the start at flyhalf and is paired with scrumhalf Will Genia, who edged out Nick Phipps to claim the number nine shirt for the first time since the opening match of the season against South Africa in Brisbane.

With only a four-day turnaround before Australia’s second match of the tournament against Uruguay, Cheika has decided to prepare two different starting sides.

The 15 picked to take on the Fijians was always going to be his strongest team and is likely to form the basis for the line-ups to face England and Wales in the heavyweight pool clashes.

“It’s important to give everyone an opportunity early on,” Cheika said. “We’ve done that throughout our lead-up to this tournament and I believe it’s a good way to go.”

Scott Sio has retained his place as starting loosehead prop from James Slipper and will pack down with skipper Stephen Moore and tighthead Sekope Kepu in the front row.

Rob Simmons will marshal the lineout from second row alongside Kane Douglas with Scott Fardy at blindside flanker offering a third jumping option.

Inside centre Matt Giteau will play his 97th test but that makes him only the second-most experienced player in the side behind Adam Ashley-Cooper, who will start on the wing and win his 109th cap.

Tevita Kuridrani and Israel Folau have become fixtures at outside centre and fullback respectively, while Rob Horne’s defensive strength has won him the start on the left wing.

Cheika has gone with two locks on the bench in the hulking Will Skelton and Dean Mumm to counter what he expects to be a big physical challenge from the Fijians.

“It’s great be able to finally pick a team and get started,” he added.

“Our groundwork is done now and we are eager to get into the battle — a battle we know will be very intense against this Fiji side.”