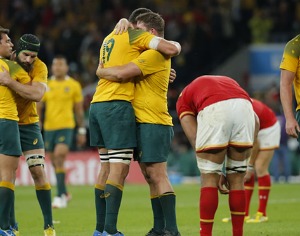 The Australian Wallabies have sent a strong message to World Cup contenders after their defensive win over Wales in the early hours of this morning at Twickenham, London.

Wales took lead in the first half dominating field play and ball possession, with the Wallabies struggling to get the ball over the line.

It was evident in the opening minutes of the first half, that Wales were hungry for a win.
With possession of the ball, and strategic field positioning, the Wallabies defense appeared to be rusty, but not for long, as they barricaded a try just minutes into the first half.

But a penalty goal on the fourth minute would see Wales take lead, 3 nil.

The man of the minute from Australia’s last face off with England, Bernard Foley hit pin point accuracy with his goal kicking, taking the Wallabies to a 6 all draw 30 minutes into the first half, and later ending the first 40 minutes with another.

Wales discipline in the second half, would give the Wallabies an opportunity to build momentum and control the game.

Genia’s yellow card for failing to go back 10meteres and Dean Mumm’s for a tackle in the air was a disappointment, leaving thirteen men on field.

The Australian’s defence with two men down, showed why they are the strongest contenders for this year’s cup.