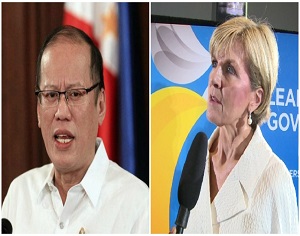 Australia is being forced to seek new countries to take its refugees, following the Philippines’ refusal to accept them.

Australia’s hardline stance on the arrival of illegal immigrants or asylum seekers, via boats, gave birth to its current controversial policy of offshore refugee detention and processing facilities on Nauru and Papua New Guinea.

But that policy took another blow last week, when President Benigno Aquino rejected Australia’s proposal to permanently resettle refugees in the Philippines.

President Aquino said his country did not have the capacity, or the resources to accommodate refugees, as it aims to deal with its own internal issues.

But Australia’s Foreign Minister, Julie Bishop, who was in Port Moresby on Friday, despite President Aquino’s refusal said negotiations were still ongoing.

“We want to see the resettlements take place; there have been a number of people who have volunteered to go back home and I expect that this would the case. The message to the people smuggling trade is that people who pay people smugglers, will not be resettled in Australia,” Bishop said.

Canberra had approached Manila after a series of scandals involving allegations of rape, physical abuse, and mental cruelty against detainees held on Nauru and Manus Island in Papua New Guinea.

The Australian government is increasingly under pressure to find a more humane solution.

But President Aquino dashed hopes of a deal, saying the Philippines do not have the “capacity at this point of time to afford permanent residency to these people”.

Australia is fast running out of third-country options as it seeks to maintain its policy of offshore detention.

A high court decision in 2011 means that, under current laws, Australia can only legally make deals for the processing and resettlement of refugees with countries that signed the UN’s 1951 Refugee Convention.

In the Southeast Asia region, that does not leave many options; only Cambodia, East Timor and the Philippines are signatory countries.

In the Pacific region, the small islands of Fiji, Papua New Guinea, Samoa, Tuvalu and the Solomon islands are all signatories.

School Dropouts in Hela Given a Second Chance