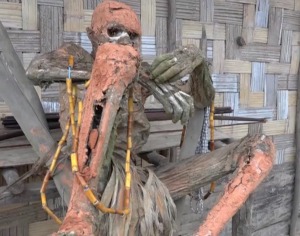 Up until the 1960s, the practice of smoking the bodies of dead relatives was practiced by a small group of people in Aseki, Morobe province.

The remains of that cultural practice still exist where bodies of their ancestors sit huddled on platforms preserved for a century.

For the first time Hangapenga villagers in Aseki brought one of the bodies to draw the government’s attention to the tourism potential of the remote cultural site.

The particular smoked body shown is about 100-years-old and is the oldest among other bodies preserved in this manner.

Arus Zekaria is one of the custodians of this smoked body. He is one of the few people who makes decisions concerning the corpse.

Over the last 30 years, the site where the bodies are kept has been the focus of tourists. But the cultural sensitivities have limited the exposure of this site as a tourist attraction.

The smoked body was brought out on Christmas Day, 2015, to capture the government’s attention on the tourism potential of the cultural site.

This is the sixth generation of people who are still practicing this culture.

It is not known when it began. But, this practice is done to preserve their dead relatives in order for the future generations to see their ancestors. Despite the heat and humidity the corpses are well preserved.

The bodies are covered in red clay to slow down decomposition. Heating them over a fire then dries the bodies and other necessary processes follow.

These smoked bodies have been featured in many magazines around the world, and have also captured the attention of anthropologists, journalists and even filmmakers for over a decade.