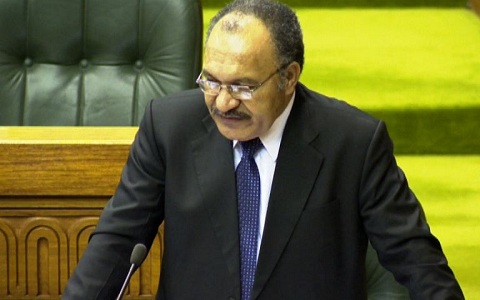 Justice Kariko also noted that the police commissioner is in control of the police force and this matter was now with him to handle.

The judge handed down his ruling in a packed court room in Port Moresby today.

Justice Kariko, in a 14 page ruling, said the courts would not interfere with the work of police, saying the arrest was an integral part of the investigation functions of the police.

While Justice Kariko’s ruling to dismiss the motions by the plaintiffs seeking interim restraining Orders, he also said the fact that Police Commissioner, Geoffery Vaki, has agreed not to arrest the plaintiffs, he does not need the court’s endorsement on how he should discharge his constitutional duties.

Vaki believes that more work is needed to be done on the cases against the plaintiffs, Marape and O&rsquO’Neill and arrests were not appropriate at this stage, therefore agreed to the interim restraining Orders sought by the plaintiff’s lawyers.

To this Justice Kariko said the Commissioner had ultimate control over the force and that the administration and control of police was vested with him.

He, however, accepted the argument by the Queen’s Counsel, Manuel Varitimos, who stood in for Sam Bonner last week that the court had the powers to stay an arrest by the police. However, he said this only applied to cases where there was an abuse of power by police and the courts did not find such evidence in this matter.

He, therefore, dismissed the application by the Prime Minister seeking interim restraining Orders.

He also ordered all parties to bear the costs themselves as the defendant, Paul Paraka, did not offer any arguments in the hearing of the applications.