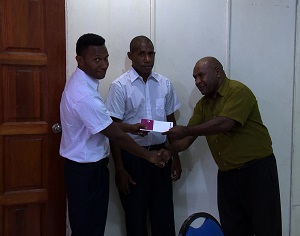 Two aviation students from the Asia Pacific Institute of Applied, Social, Economic and Technological Studies (APIASETS) will further their aviation studies at the Cairns Aviation College in Australia.

The dreams of two local aviation students from the Asia Pacific Institute of Applied Social, Economic and Technological Studies have finally been realised.

After completing six months of basic aviation courses with the local institution, they were selected to advance their studies at in Australia.

The two thanked APIASETS for creating a pathway for them to attain aviation studies overseas.

For both students it has been a long and tough journey.

Tating from the remote North Fly District of Western province said after acquiring a pilot licence he will return back to Tabubil to fly OK Tedi Dash 8 planes as part of a contribution to his people, and to also fulfill commitmen’s to his sponsors, OK Tedi Development Foundation.

Hagua’s mother Rose, speaking on behalf of the parents, said it’s a great opportunity that they are given a second chance. She also thanked APIASETS for its assistance in sponsoring their child.

The two aviation students flew this morning to Cairns to begin training.