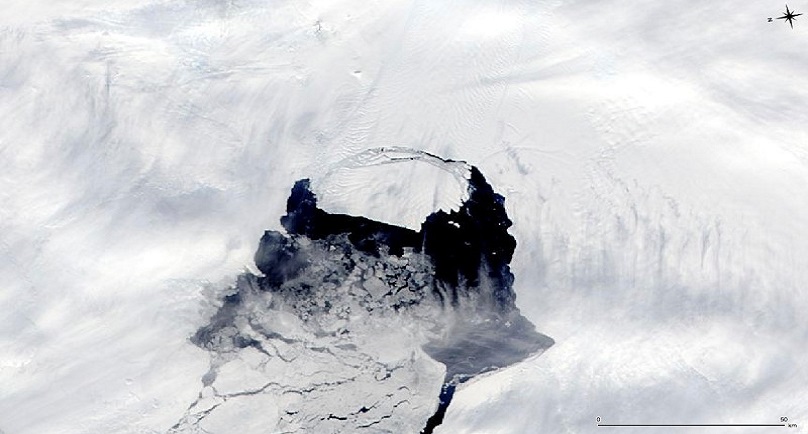 Image: An iceberg which was part of the Pine Island Glacier is shown separating from the Antarctica continent in this MODIS image taken by NASA’s Aqua satellite on November 10, 2013 and released by NASA November 14, 2013. REUTERS/NASA/Handout via Reuters

OSLO (Reuters) – The biggest icebergs breaking off Antarctica unexpectedly help to slow global warming as they melt away into the chill Southern Ocean, scientists said on Monday.

The rare Manhattan-sized icebergs, which may become more frequent in coming decades because of climate change, release a vast trail of iron and other nutrients that act as fertilisers for algae and other tiny plant-like organisms in the ocean.

These extract carbon dioxide from the atmosphere as they grow, a natural ally for human efforts to limit the pace of climate change blamed on man-made greenhouse gas emissions.

Ocean blooms in the wake of giant icebergs off Antarctica absorbed 10 to 40 million tonnes of carbon a year, the study estimated, roughly equivalent to annual man-made greenhouse gas emissions of countries such as Sweden or New Zealand.

Until now, the impact of ocean fertilization from the demise of giant icebergs, defined as floating chunks of ice longer than 10 nautical miles (18 kms) or almost the length of Manhattan, had been judged small and localized.

“We were very surprised to find that the impact can extend up to 1,000 kms,” (625 miles) from the icebergs, Professor Grant Bigg of the University of Sheffield, an author of the study published in the journal Nature Geoscience, told Reuters.

The scientists studied satellite images of 17 giant icebergs off Antarctica from 2003-2013 and found that algae could turn the water greener for hundreds of kms (miles) around the icebergs, with nutrients spread by winds and currents.

There are typically 30 giant icebergs floating off Antarctica at any one time – they can linger for years. The study said the giant icebergs had an outsized impact in promoting ocean fertilization when compared with small icebergs.

Bigg noted that global man-made greenhouse gas emissions had been growing at about two percent a year. “If the giant icebergs weren’t there, it would be 2.1 to 2.2 percent,” he said.
Ken Smith, an expert at the Monterey Bay Aquarium Research Institute in California who reviewed Monday’s study, said in an email he found the new findings “convincing”.

The Sheffield University scientists noted other estimates that the amount of ice breaking off Antarctica had gained by five percent in the past two decades and that it was likely to rise in future with warming. That in turn could spur more ocean fertilization.

(Link to study at: http://www.nature.com/articles/doi:10.1038/ngeo2633; Reporting by Alister Doyle; Editing by Tom Heneghan)