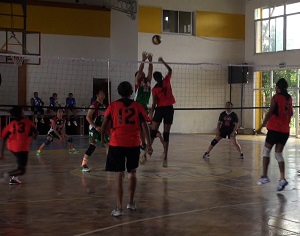 As preparations intensify in the lead up to the 2015 Pacific Games, the National Amoa Women’s Volleyball team played a trial match, against the 2014 Filipino Volleyball Association men’s division champions, Primus.

The strength of the PNG Amoa women was tested by the Filipino men, losing the first set to Primus 18-25. But the Amoa women came back strong in the second set, making the most of every opportunity, and took the set easily 25-15.

National Coach, Michael Unata, was thrilled with the team’s performance and praised the efforts of the younger players.

With the final team to be announced in the coming weeks; he believes the team will be boosted with the younger players, combining well with the senior members of the team.

Team Manager, Bala Babaga said there are many potential players coming through and it is exciting to see the team progress.

With players vying for a place on the final squad, many of the younger players are hopeful to represent Papua New Guinea at the games.

Locals: Better Roads Will Enable Surrendering of Marijuana and Homebrew