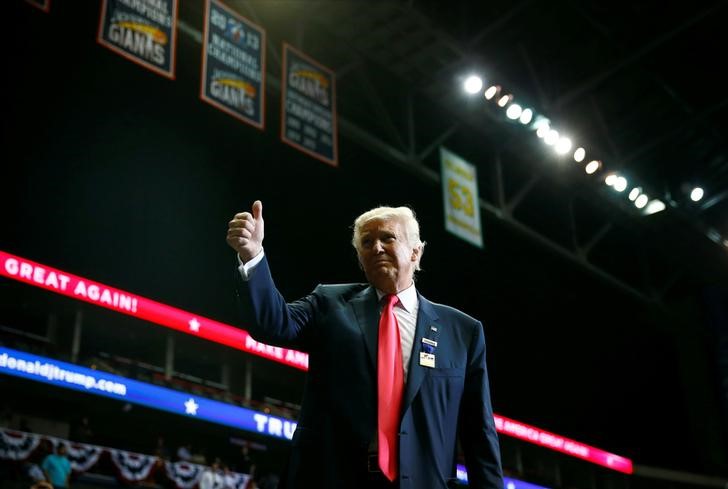 By Steve Holland and Emily Stephenson

WASHINGTON/PORTLAND, Me. (Reuters) – Supporters of Republican Donald Trump urged him to get back on message on Thursday after a week of dropping opinion poll numbers and a war of words with ranking Republicans over his U.S. presidential campaign.

In response to the criticism, Trump pledged to focus more on Democratic candidate Hillary Clinton, who emerged from last week’s Democratic National Convention with a lead in the polls and who has been consistently attacking him as temperamentally unfit for the presidency.

At a rally in Portland, Maine, on Thursday, Trump kept his attention on trying to undermine Clinton’s candidacy. He said the fact that she has moved past a scandal over her use of a private email server as President Barack Obama’s secretary of state was “probably the greatest accomplishment that she has ever had in politics.”

Since formally accepting the Republican nomination two weeks ago, Trump has exasperated many supporters by getting bogged down in a public spat with the parents of an American soldier killed in Iraq and some fellow Republicans.

Billionaire investor Wilbur Ross said he still backed Trump, but urged him to stop engaging in exchanges that benefit the Democrats and make the real estate mogul’s behaviour the issue in the campaign.

“This election is Donald’s to lose and so far the Democrats have been clever about baiting him and he generally has bitten,” Ross said in an email to Reuters late on Wednesday.

U.S. House of Representatives Speaker Paul Ryan, who has endorsed Trump but has not received a reciprocal endorsement from the New York businessman in his re-election bid, told WTAQ radio host Jerry Bader in Green Bay, Wisconsin, that Trump has “had a pretty strange run since the convention.”

Michael Caputo, a former Trump adviser who still supports him, said Trump still has time to right the ship.

“Staying on message is absolutely key,” Caputo told Reuters. “After 30 years of speaking his mind, Mr. Trump has to understand that the general election for president of the United States is all about staying on message.”

Actor and director Clint Eastwood, a prominent celebrity supporter of the Republican Party who appeared at its 2012 U.S. presidential nominating convention, offered an alternative view, saying Trump says some “dumb things” but that Americans should get over it.

“He’s onto something because secretly everybody’s getting tired of political correctness, kissing up,” the acclaimed actor and director told Esquire magazine. “That’s the kiss-ass generation we’re in right now.”

At the same time, Trump’s lukewarm support for the NATO alliance drew criticism from 37 national security experts from both Democratic and Republican administrations.

“We find Trump’s comments to be reckless, dangerous, and extremely unwise,” they wrote in a statement.

Obama, at a Pentagon news conference, dismissed Trump’s statements that the election could be “rigged” against him.

“Of course, the elections will not be rigged,” he said.

Trump’s rough patch has contributed to a dip in support in some battleground states. A WBUR/MassINC poll in New Hampshire showed Clinton leading Trump, 47 percent to 32 percent.

Speaking with reporters after a Clinton campaign event in Las Vegas, U.S. Senator Harry Reid, the Senate Democratic leader, said he believed traditionally Republican-leaning states such as Arizona and Georgia are going to be competitive this election, and he expects Clinton to campaign there.

In Portland, some people at Trump’s rally said the candidate should stop getting distracted.

“I don’t like how he gets off track,” said Bill Devine, 65, of Bath, Maine. “He needs to stay focussed on his campaign.”

Trump campaign manager Paul Manafort told CBS’s “This Morning” that the campaign is comfortable where it stands now and said the news media have built a false narrative in which Democrats are controlling the race to the Nov. 8 election.

Manafort said that Trump’s dropping poll numbers “were expected” and that he expected the numbers to even out soon.

“The framework of this election favours Donald Trump. If we run the campaign that we plan on running, we think we’re going to win,” he said.

Concern about Trump has spilled into at least one congressional race.

U.S. Representative Mike Coffman, a Colorado Republican, has released a campaign ad in his own re-election bid promising to “stand up” to Trump if Trump is elected.

“People ask me, ‘What do you think about Trump?’ Honestly, I don’t care for him much. And I certainly don’t trust Hillary,” Coffman said in the ad.

U.S. Representative Charlie Dent, a Pennsylvania Republican, told MSNBC he could not endorse Trump because of “all these unforced errors” that Trump was making.

(Additional reporting by Jennifer Ablan in New York, James Oliphant in Las Vegas and Doina Chiacu and Susan Cornwell in Washington; Editing by Will Dunham and Jonathan Oatis)

Rio’s Informal Foods a Key Part of the ‘Carioca’ Life