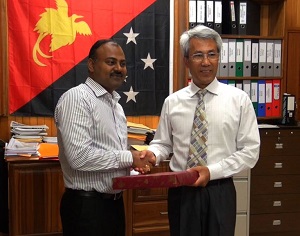 The Chinese ambassador made this remarks during his goodwill visit to the West New Britain province today.

Ambassador Ruiyou visited the Kimbe Provincial Hospital and also donated relief supplies to the flood affected communities in the province.

Papua New Guinea and China’s bilateral relationship has been growing since the Chinese embassy was established soon after independence.

The Chinese government has been assisting Papua New Guinea, in areas of health, education and infrastructure developments.

Today, the Chinese ambassador maintains his government’s commitment to assist Papua New Guinea, in strengthening business and project development partnership in the country.

“This visit is to render the goodwill of the Chinese people and government with the West New Britain provincial government and people,” says ambassador Ruiyou.

This morning he met with West New Britain Governor, Sasindran Muthuvel, and assured him of partnering in developing the province.

The visit will seek to open up more opportunities for the Chinese to improve areas of infrastructure development and economic activities in West New Britain.

“I’m looking forward to have more opportunities to continue our friendship and cooperation. I see the potential for further cooperation in many sectors in tourism, health and education.”

The Kimbe Provincial hospital received a new operating theatre from the Chinese government.

The chinese ambassador also sent out his sympathy on behalf of the people of China, to the communities affected by cyclone and flash floods in West New Britain.

The Chinese government and also Chinese companies operating in Papua New Guinea also made donations in cash and kind.