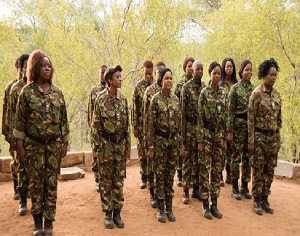 The Black Mambas Anit-Poaching Unit (APU) was founded by Trans Frontier Africa, created to protect the Olifants West Region of Balule Nature Reserve and has since expanded to cover the entire Balule area.

The 26 Mambas, all from disadvantaged communities on the border of the reserve, have been given six weeks of paramilitary training and wildlife education and work alongside 29 armed guards and an intelligence team that seek to stop the poachers before they can kill. The Black Mambas have identified and destroyed over 12 poachers’ camps and three bush meat kitchens within the “buffer-zone”.  As well as the lion, elephant, buffalo and leopard, the 40,000-hectare private reserve is home to zebra, antelope, wildebeest, cheetah, giraffe, hippos, crocodiles and hundreds of species of trees and birds.

Mambas were founded by Craig Spencer, head warden of Balule, to act as an unarmed but visible frontline presence in the ongoing battle against the poaching of rhino and other endangered species – like the idea of “bobbies on the beat”.

Day-to-day duties include patrols of up to 20km a day on foot and by vehicle at night, pulling out snares, conducting roadblocks and assisting with tracking collars.

Rhino horn has become very valuable and the species could become extinct in 10 years, and with an innovative and inspiring approach snaring activities have been reduced by 76% since the deployment in 2013.

The Mambas have also started an outreach programme called Bush Babies with 10 local schools. People were not aware but now they teach the kids and they go home and send messages to their parents about how to preserve the Rhinoceros Specie.

Their success in reducing rhino deaths and breaking down the barriers between communities and wildlife reserves is their most powerful weapon in the war on poaching.

Rudisha back on top of the world, Dibaba dominant