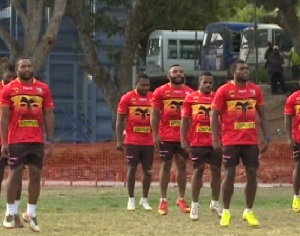 The annual Prime Ministers thirteen clash between Papua New Guinea and Australia is set for this weekend on the 26th of September.

With the hype slowly building to the clash, twelve time test Papua New Guinean Paul Aiton has expressed his disappointment at being brushed aside by PNG selectors since the 2013 Rugby World Cup.

Paul Aiton is no stranger to the red, black and gold jumper; having represented PNG on numerous occasions.

Aiton, Vice-Captain of the Kumuls at the 2013 Rugby World Cup, has expressed his disappointment at not being considered for any selections at all, over the last year.

He told Australian NRL reporters that he has been brushed by the Kumuls following the “disgraceful” 2013 World Cup campaign.

Aiton alleges that the national selectors to be politicised claiming that he and other good players playing overseas have not been considered to represent PNG.

This also comes after Panthers hooker, James Segeyaro has made his alliance clear that he will be playing for the Kangaroo’s and not PNG.

Segeyaro said his decision was based on the lack of respect to his father after all he did for rugby league in the country, and will pull on the Kangaroo’s jersey in this weekend’s Prime Ministers 13 match in Port Moresby.