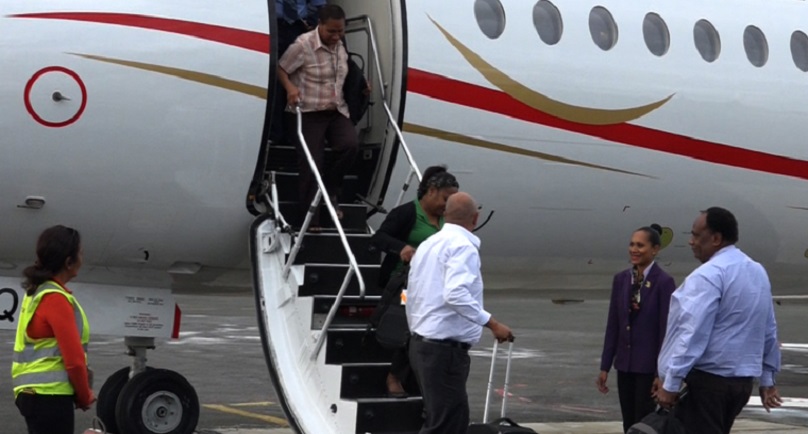 Another Melanesian country, Vanuatu, is now classified as one of Air Niugini’s destination.

On Wednesday June 24, 2015, the first commercial flight, Fokker 100 aircraft P2-ANQ, was given a wash down upon its arrival at Port Vila.

At the terminal, warm welcome by the Papua New Guinea community in Vanuatu.

In a ceremony called ‘salu salu’, team and operating crew were presented with cloth called labalaba.

The PNG Community in Vanuatu was very excited because this service will save costs and enable frequent visits into the country.

Pastor Luke Frankline said that with the National Flag Carrier now operating into Port Vila, this saves costs for passengers wanting to fly directly to Papua New Guinea within a day.

In the last 14 days since he resided in Vanuatu, passengers would travel through Brisbane, Australia.

For Romila Bue, she is happy because now, with the service, home is just near.

Hellen Frankline told EMTV News that she danced with tears of joy, when the Bird of Paradise touched down at Port Vila.

“It was very exciting. My heart cried, as I saw my airline landing in Vanuatu. The Bird of Paradise when it touched down,” said Hellen.

It was history for the operating crew, who brought the ‘Bird of Paradise to Port Vila under the Command of Captain Vincent Tongia.

Katherine Daniel was one of the cabin crew, who actually shed tears, while the plane touched down in Port Vila.

“I am a patriotic Papua New Guinean and I am happy, being part of the crew,” she said.

The flight departs Port Moresby on Wednesday through Honiara and overnights Port Vila, returning on Thursday.

This is the 4th service between PNG and Solomon Islands.

Lorengau Market Remains Closed Due to No Electrical Wiring Installed