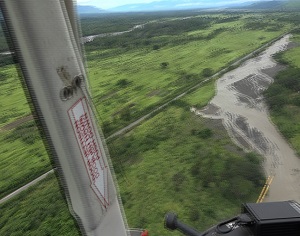 The Morobe Provincial Works department did an Ariel survey of flood plains along rivers in Tararan today to see potential risks to the Madang and highlands highway.

Continued rains has resulted in the burst banks of the Markham’s Rumu river, destroying food gardens and threatening to destroy the highway.

The rains have come after about six months of drought.  The Markham River and its smaller streams are flooding.

Rumu Rivers has flooded and burst its banks. Food gardens have been destroyed and parts of the Highway could be swept away.

On February 16, the Provincial Works department took an Ariel survey of the stretch of highway along tararan.

What they found was impending damage to the Madang and Highlands Highway if the rains continue.

About twenty kilometers up river from the Highway, the river needs to be drained out. Two outlets need to be dug to reduce waters levels.

The government could spend millions of kina to build a new road, if the outlets aren’t made now.

“To fix the problem now would be to build to outlets at the head of the river where it’s spilling over. It will cost about K1.5 million,” said Kassen.