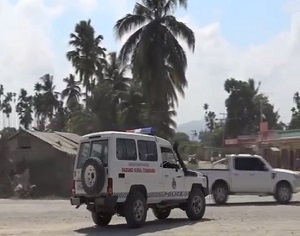 An escapee wanted by the Madang Police has been wounded, and pronounced dead on arrival at the Modilon General Hospital.

The escapee and his accomplices were attempting to hold up a police car, as well as other cars travelling at the time, when police fired shots that struck the man’s leg.

The incident occurred this morning at the roundabout at the 26 Settlement.

Another incident also occurred at 26 Settlement over the weekend, with a man and his wife confronted by a group of six men.

In an attempt to defend his wife, the husband was slashed with bush knives, and so to the wife after a failed attempt to rape the woman.

Daniel Takian, the woman’s brother told EMTV News that relatives of the couple, in retaliation, burned down a house and killed two pigs at the suspects’ residence also in the same settlement.

Police have made their presence known, but the situation is still tense. An investigation into both these incidents still continues.