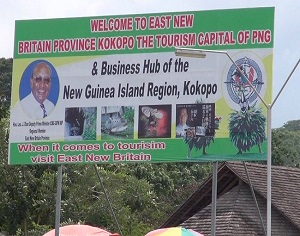 With a vision and mission to empower local communities and grow the local economy, East New Britain is a province that could well be setting the pace in tangible LLG developments in Papua New Guinea.

As two of their officials explain, it’s due commitment, strong leadership and a supportive population.

The team reported to the leaders’ summit that rural electrification, water projects and road side markets were part of over 500 projects that were implemented last year.

Acting Provincial Administrator, Wilson Matavu, said this is because of strong partnership among the political leaders and local leaders who, “stand together in decision making.”

He also said credit should go to a “resilient population who continue to support the government, support the church, support development in the province.”

Something that makes East New Britain stand out is a unique policy called no-compensation.

It applies to all development projects that encroach onto customary land.

Landowners are not to ask for compensations, which Mr Matavu said helps a lot when rolling out government initiatives.

Mr Matuve said they have a strong administrative structure that is responsive to national government policies which is helped by a committed workforce.

From their presentation, they showed that they are one province that has taken maximum benefit of the services improvement program funds.

“All the service improvement funds helped to maintain our existing infrastructure and build new ones,” Matavu said.

The province is not without its challenges, like other provinces there has been a delay in TFF funding reaching schools, especially remote schools. But as explained by Anastasia Dio, Kokopo Acting Deputy CEO, the LLG and provinces are always at a ready to assist schools during these shortfalls.

Looking ahead, Mr Matavu said, as a province they will continue to promote their economic strengths.