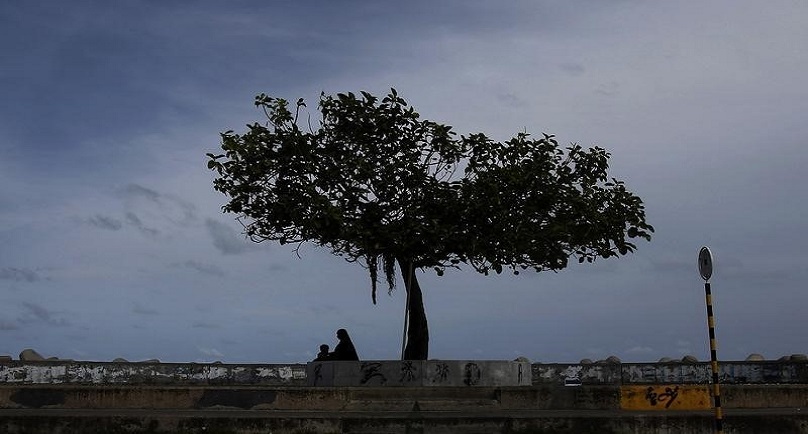 Image: A woman and her daughter sit under a tree on a beach in Male August 30, 2012. REUTERS/Adnan Abidi/Files

LONDON (Reuters) – Rising sea levels and tidal waves are washing away coastlines on many of the 196 inhabited islands of the Maldives, and there is no insurance policy to cover the costs.

Global leaders are close to the end of two weeks of talks to try to agree an accord to slow climate change. A draft agreement this week showed countries had made progress on some sticking points but remain divided over several core issues before Friday’s deadline.

A weak deal could lead to a situation where “insurance will be pretty hard to find in some places”, according to Matt Cullen, head of strategy at the Association of British Insurers, as droughts, flash floods and wildfires become more common around the world.

But the most vulnerable countries are already finding it onerous to fix the damage wreaked by climate change.
“As of now, there is insurance cover for high waters and flooding, but not for coastal erosion,” Thoriq Ibrahim, minister for environment and energy for the Maldives, told Reuters by phone from Paris. “It’s very expensive to repair.”

The Asian Development Bank has described the “pancake-flat” Maldives in the Indian Ocean as the country most at risk in South Asia from climate change. If left unchecked, this could cause annual economic losses of nearly 13 percent of gross domestic product by the end of the century, it estimated.

AOSIS, the Alliance of Small Island States, which the Maldives currently chairs, wants developed countries and insurers to provide help for the costs of rising sea levels.

There are already some insurance options for managing other extreme weather losses.

Local insurers are able to provide cover for flood damage in the Maldives, Ibrahim said, who then farm some of the risk out to international reinsurers.

But the lack of specific climate change-related insurance meant one hotel resort in the Maldives was recently unable to claim on losses caused by erosion, a local insurer told Reuters.

For now at least, industry participants see insuring for rising sea levels as a no-go area – as risky as covering a house for fire when someone is already walking up the path with a lit match.

“Risks from the slowly but steadily rising sea level are not insurable because there is no sudden and unforeseeable trigger, which is a prerequisite for insurance,” said Peter Hoeppe, head of geo risk research at reinsurer Munich Re.

Nevertheless, international insurers, working with multilateral lenders, governments and development organisations, have come up with special arrangements to help cash-strapped countries in the Caribbean and Africa deal with natural disasters such as hurricanes, extreme rainfall and drought.

These are the Caribbean Catastrophe Risk Insurance Facility and African Risk Capacity.

The United States pledged more support for these initiatives in Paris, along with financial backing for a similar project in the Pacific Islands. Twenty of the countries most vulnerable to climate change, from the Himalayan kingdom of Bhutan to the Pacific island nation of Tuvalu, said in October they plan to work for a pooling mechanism to share insurance risk.

These arrangements typically pay out if a certain natural disaster is triggered – such as if a specific level of rainfall is exceeded within a set period – so those that have suffered get the cash far faster than if they have to assess damage and make claims.

Islands and insurers agree that more needs to be done, however, to understand the risks involved so that suitable insurance can be offered, for instance through the development of more sophisticated forecasting.

“We need to make pretty big investments in data analysis and technology, so we can be as informed as we can be,” said Mike McGuire, chief financial officer at insurer Endurance Specialty Holdings. “As an industry, we never know exactly what’s going to happen.”

Small island states are pushing for a mechanism in a Paris accord to cover loss and damage, for instance from typhoons or sea level rise that exceed nations’ abilities to adapt.

“There has to be some real international mechanism, funding, that is predictable,” Jose Ramos-Horta, former president of East Timor and a Nobel Peace Prize laureate, told Reuters in Paris.

Most of the existing multilateral initiatives will help only governments, rather than providing broader support for those suffering directly from natural disasters, according to Reto Schnarwiler, head of Americas and EMEA at Swiss Re Global Partnerships.

“The injured party is the government. They would use these proceeds for emergency relief, reconstruction of public infrastructure – it’s not a facility for individuals and business.”

A study by reinsurer Swiss Re shows that in the last 10 years, policies covered only 30 percent of global catastrophe losses, leaving governments, companies and individuals to pay $1.3 trillion.

In the U.S. island state of Hawaii, the risks from increasing natural disasters due to climate change are “real and large”, according to Celeste Connors, executive director of Hawaii Green Growth. A category 4 hurricane over Waikiki – a beachfront area of the state capital Honolulu – could cause $20-40 billion in losses, she said.

“Hawaii has been lucky over the last several years, but luck eventually runs out. There’s currently a gap between Hawaii’s exposure and investment in climate-resilient infrastructure and post-disaster financing.”
Other risks are also becoming uninsurable.

Robert Muir-Wood, chief research officer at catastrophe risk modelling firm RMS, said that in the Bahamas, houses built on canals were lying vacant due to lack of insurance against hurricanes. “That’s one example of a dystopian future, where insurers simply walked away.”

Without insurance, countries need to spend the money themselves to become more resilient to climate change.
The most drastic option is to move house.

The Pacific island state of Kiribati bought 6,000 acres (2,500 hectares) of land in Fiji last year to help safeguard future food supplies and perhaps to become a home if seas rise, as part of a policy of “migration with dignity”.

“The worst case scenario is relocation of some islands,” said the Maldives’ Ibrahim. “We want to adapt, we want to stay, and we want funds for that.”

(Additional reporting by Daniel Bosley in Male and Alister Doyle in Paris; editing by David Stamp)

Bowie Leaves $100 million for his Wife and Children