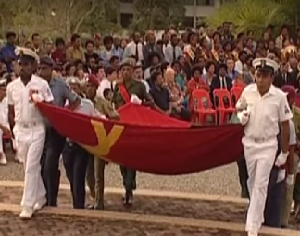 Three Papua New Guinean statesmen and women have described the constitution of PNG as a pillar of strength for the country.

The three were interviewed by EMTV production for its 40th independence anniversary special.

In their capacity as politicians, and for one of them as a member of the Constitutional Planning committee, they say the strength of the constitution lies in the fact that it was home grown.

Sir John Kaputin was one of the 15 people who were given the task of putting together the constitution of Papua New Guinea.

He described the wide consultation of “some 400 meetings throughout the country” as a blessing that contributed to the report of the CPC which formed the foundation of PNG’s national constitution.

Kaputin spoke with pride about a document that was produced by Papua New Guineans, which was drafted to guide the progress of a new nation.

“I think it’s unique in that sense it was not written for us by Australia, or like in Africa the constitution was written in London, no,” Sir John Kaputin said.

The strength of this constitution has been put to the test on various occasions as PNG struggles with the challenges of developing towards a modern society.

One of those times was the ‘Sandline Crisis’ which occurred during the height of the Bougainville Conflict.

It was 1997; when the conflict on Bougainville was running into its tenth year.
Sir Julius Chan was Prime Minister then.

His government’s decision to hire mercenaries to assist the PNG Defence Force in this conflict created a controversy.

Sir Julius said he made a decision as the CEO of PNG and he faced the consequences of that decision.

Fourteen years later the constitution would once again be put to the test on another political matter.

Dame Carol Kidu was part of the government at the time of the 2011 political impasse.

Dame Carol says PNG has a lot to celebrate at its 40th independence anniversary and the constitution is something that should be celebrated.

Man arrested for multiple murders of wife, step-daughters and babysitter