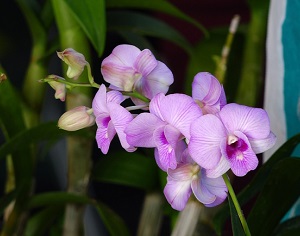 Orchid enthusiasts in the Nation’s Capital were treated to an impressive array of colourful displays during the annual International Orchid Spectacular.

The event held at the Sir Rabbie Namaliu Orchid Gardens was hosted by the PNG Orchid Society over a three day period, ending today.

City residents and international visitors flocked to the Sir Rabbie Namaliu Orchid Gardens in the hundreds since the opening on Saturday, purchasing and admiring the plants.

Vice President for the PNG Orchid Society, Godfrey Seeto, told EMTV News that despite a low key opening this year and a slight change in the show dates, the turnout was impressive.

Attendance was somewhat dampened by rain on Saturday with 700 people attending the opening, however numbers began to pick up on Sunday with over 1000 visitors.

While the International Orchid Show is an avenue to promote the importance of the horticulture industry in the country, the annual orchid show is a reminder of the potential orchid plants have, as an income-generating commodity.

The International Orchid Spectacular is usually held during September annually, however the prestige event was moved to July this year to coincide with the Pacific Games, in hopes to attract and awe international visitors.